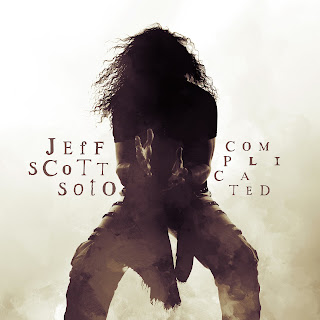 Jeff Scott Soto is a musician that needs no recommendations! The voice of the legendary melodic hard rock legends of TALISMAN, the man with a golden voice that collaborated with numerous bands/musicians such as Yngwie Malmsteen, Axel Rudi Pell, Gus G. and Takara just to name a few is back in business with his eighth official studio album.
The new opus entitled "Complicated" is going to be released through Frontiers Music this May!! As with his previous studio album of all new material, “Wide Awake (In My Dreamland)", Soto teamed up again with producer and songwriter Alessandro Del Vecchio (Hardline, Revolution Saints, Edge Of Forever).
After the very first spin of Soto's new effort, I have to say that "Complicated" kicks some serious asses!! That's sure!! The whole vibe here reminds a lot of Jeff's previous works with both Talisman and W.E.T. and that's a great thing!! For example, just check out the songs like "Home Again", the groovier "Disbelieving" and "Back To The Beggining" and you'll understand what I'm talkin' about here.
There are, of course, plenty other songs here that refer to Jeff's latest works with W.E.T. or his solo efforts such as "Complicated", the huge and more AOR-ish "Don't Look Back", "Obsession" and "Thank You" that make the whole record an extremely interesting and enjoyable listening from start to finish from a unique musician like Jeff Scott Soto!!! Another true highlight out of 2022!!
Songwritting : 8
Production : 8
Songs : 9
Musicianship : 9
Overall Rating : 8,50 / 10
Social Media:https://www.facebook.com/JeffScottSoto/https://www.instagram.com/jeffscottsotoofficial/https://sotoworld.net/