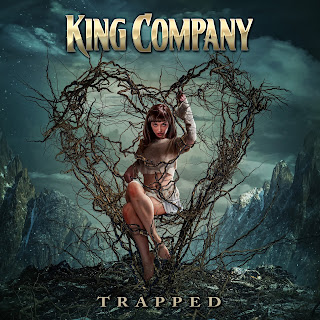 The story of KING COMPANY starts back in 2014. After A few years later, the band signed a record deal with Frontiers Music and released its debut opus entitled "One For The Road" which gained a positive feedback from both fans and music press.
In 2018, King Company released its second effort, "Queen Of Hearts", and again it received good critics from the music press. This second release saw a new singer, Leonard F. Guillan as Pasi Rantanen but he had to leave the band due to temporarily losing his voice.
The misfortune with vocalists continued. Ilkka Keskitalo became the new singer in 2019, with whom King Company began to produce its third album. In 2020, the first demos that were sent to AOR Heaven resulted in signing a deal. The recordings took over one year in several sessions and they were mixed and mastered by Jesse Vainio (Sarah Brightman, Apocalyptica, Sunrise Avenue, Gregorian, etc.).
So, the new King Company opus with the title "Trapped" is now a fact and it's going to be released through AOR Heaven this June. 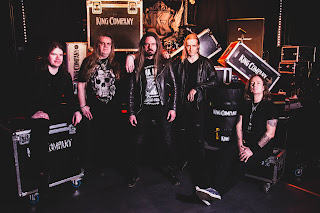 The first highlight comes with the impressive and heavier tune of "Stephanie". This is a really amazing heavy rocker that features a crunchy guitar work, a tight rhythm section and a killer chorus line enough to sing-a-long. "Dangerous Tonight" is yet another up-beat, heavy and catchy song out of the new release while in "Screen Is Your Life" and "Fair Winds" we have two more solid rockers. I like, also, the modern and heavier "Nobody's Fool".
King Company's brand new "Trapped" is an overall solid record. It has its moments that if you love your hard rock heavy, guitar-driven, loud and up-beat, then check it out in its release date.
Songwritting : 7
Production : 8
Songs : 7
Musicianship : 8
Overall Rating : 7,5 / 10
**KING COMPANY are: Ilkka Keskitalo – Vocals; Mirka Rantanen – Drums; Antti Wirman – Guitars; Time Schleifer – Bass; Jari Pailamo - Keyboards
www.facebook.com/kingcompanyofficial/
www.kingcompanyband.com
www.twitter.com/kingcompanyband
www.instagram.com/kingcompanyband

Posted by Heavy Paradise
at Sunday, May 09, 2021 Labels: melodic hard rock / metal
Email ThisBlogThis!Share to TwitterShare to FacebookShare to Pinterest