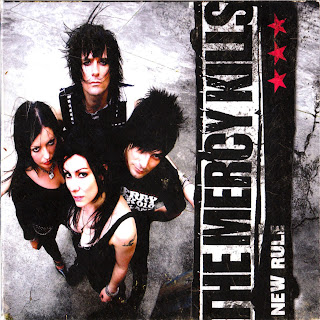 The Mercy Kills is a punk/sleaze heavy rock band from Melbourne and "New Rule" is the band's debut EP. Originally written and produced back in 2010, "New Rule" is a solid 5 track mini album that shows the band's love for bands such as L.A. Guns, Guns 'N' Roses, Ramones and The Cult (earlier).
Initially, New Rule was only available as a short run of CD's and was never officially released. The band always felt this as a thorn in their side and are now happy to see it getting out there through Golden Robot Records and it will be released on 12th February.
After the very first spin of this EP, I have to say that I really enjoyed it a lot. For example, songs such as "I Wanna" and "So Many Times" are filled with this mid 80's sleaze, post-punk vibe that reminded me of bands such as L.A. Guns and The Cult. The vocals sound in my ears exactly like Phil Lewis of the great L.A. Guns (and I love Guns's earlier works...). "Fall" includes a more 'punk' feeling in it with a big bad-ass attitude.

The Mercy Kills with this 'lost' debut EP achieve to release a 'ballsy' full of attitude sleaze.punk sample that is worth to check it out if you dig bands such as Ramones and L.A. Guns!!!!
Songwritting : 8
Production : 8
Musicianship : 8
Songs : 7
Overall Rating : 7,75 / 10
https://www.facebook.com/themercykills https://www.facebook.com/goldenrobotrecords