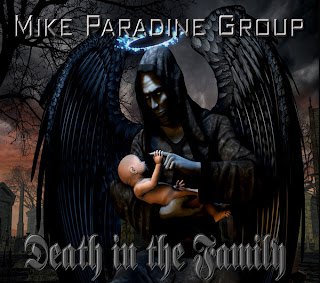 Mike Paradine, the drummer from the traditional metal band, ArcticFlame, is releasing his first solo album "Death In The Family". The album features a collection of personal songs, the subject matter consists of his on going feud with certain family members, growing up in the late 70’s, early 80’s in Bayonne, New Jersey, 9/11 and his battle with cancer as a 13 year old.

So, what we have here is a well-crafted album that in every track we have a different theme about Mike Paradine's life. For example, both "Rise Up from the Grave" and "Taste My Fist" are mentioned about Paradine's battle against cancer! Both tracks are heavy tunes with good arrangements and excellent guitar work. "Parasite" is a good cover of KISS's classic hit but the highlight of the album is, for sure, the "On a Tuesday Morning (The John J Harvey)". An excellent tune with a catchy chorus, great harmonies and very good performances.

All in all, this is an interesting debut release that will please the fans of Euro Melodic Hard Rock and some Metal fans as well.
HeavyParadise's Rating : 8/10

Track List : 1.Venom and Piss 2.Rise Up from the Grave 3.Monster's Ball 4.On a Tuesday Morning (The John J Harvey) 5.These are the Days 6.Parasite 7.Suzie with an Uzi 8.Taste My Fist 9.Bow Down to the Queen 10.Dust
Posted by Heavy Paradise
at Monday, April 02, 2012 Labels: hard rock, heavy metal
Email ThisBlogThis!Share to TwitterShare to FacebookShare to Pinterest