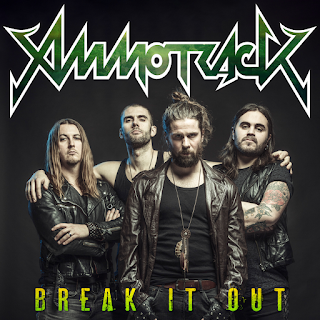 After 5 years of silence, Ammotrack is back with the new single and video "Break it Out".

The band has previously released 3 full-length albums, played at all Swedish rock festivals, executed several tours in Sweden and Europe with bands such as Hardcore Superstar, DAD and Mustasch. In 2014, Ammotrack celebrated 10 years as a band and participated in the Swedish Eurovision Song Contest.
-We never really quit the band, at home in the rehearsal studio very good ideas were created. Getting to present our new single to the fans feels absolutely magical. We have definitely pushed ourselves and taken the band's sound to a new level, says singer and frontman Mikael DeBruin.
The song "Break it out" is produced & mixed by Sebastian Forslund (Night Flight Orchestra), mastered by Thomas Plec Johansson (Soilwork, Gathering of kings, Thundermother)

Check out the band's latest video below :