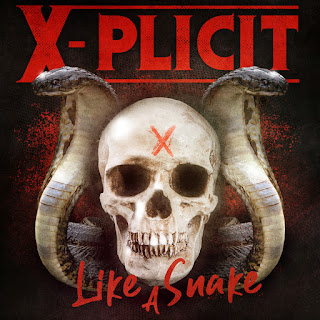 X-PLICIT is a heavy rock/sleaze band that was founded by the Italian guitarist Andrea Lanza (Skill In Veins). "Like A Snake" is entitled the band's debut and it's gonna be released through Sneakout Records/Burning Minds Music this May. The sound of X-PLICIT recalls to bands such as Skid Row, Faster Pussycat, Motley Crue, Guns N Roses but, also, from acts like Crazy Lixx and Hell In The Club.

The music is edgy, rough, guitar-driven and it includes a nice groove in it. Apart from Andrea Lanza on guitars, the band consists of Sa Talarico (Aeternal Seprium) on bass, Giorgio Annoni (Longobardeath, Homerun) on drums and frontman Simone Zuccarini (Generation On Dope, Razzle Dazzle, Norimberga, Torque, The Wetdogs).

The opening tune of "Hell Is Open" is a killer one. Furious, ass-kicking and edgy sleaze heavy rock stuff at its best. "The Great Show" features a nice groove, some slide and 'nasty' guitars and, of course, a catchy chorus line enough to make you turn up the volume! "Shake Up Your Life" is heavier while in "Deep In My Soul" we have yet another highlight out of this debut. More in a Skid Row-esque direction, this track is just ear candy! "Free", the heavy bluesy "Don't Close This Bar Tonight" and the ballad "Angel" are all three strong samples of X-PLICIT's music. 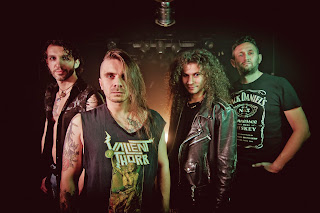 For the fans of the classic and golden era of Sunset Stip Blvd where bands such as Motley Crue, Skid Row, Guns N Roses and Ratt ruled the airwaves, this is a must have debut. But, also, for those who love bands like Crazy Lixx, Hell In The Club or Crashdiet do a favor to yourself and check out X-PLICIT's "Like A Snake"....you won't regret it.......