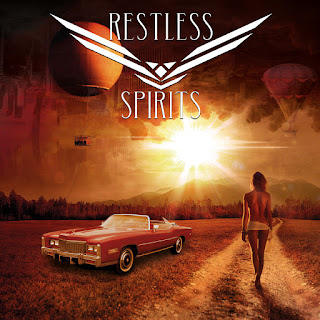 Restless Spirits is the brand new amazing project that is lead by Tony Hernando who is well-known from the melodic metal band of Lords Of Black. In his new work, Tony leaves his metal paths and he's trying to sound more in a hard rock direction with big melodies, catchy hooks n' choruses and, of course, with some really breathtaking guitar lines.

"Stop Livin' To Live On Line" is the opening tune of this new album and it's a killer one. Johnny Gioeli's vocals give the 'extra' push and rockets this song to heaven. Up-beat with a heavier riffing and a chorus line to die for, this song is just awesome. "Unbreakable" (feat. Castronovo on lead vocals) is more melodic and more in Revolution Saints direction while in "I Remember Your Name" is THE song of the album. We have Kent Hilli from Perfect Plan on lead vocals and his performances are really out of this world. I just love his voice and, of course, I love Perfect Plan so I love also this track. Melodic hard rock perfection at its highest order.

In the next couple of songs, "Cause I Know You're The One" (Dino Jelusic) and the ballad of "Nothing I Could Give To You" (J. Gioeli), we have two more solid tracks out of this debut. "Calling You" is yet another interesting moment here. A cool, moodier and more straight forward rocker that features Deen Castronovo's amazing vocal lines along with Hernando's breathtaking guitar solo which steals the show!!!! Alessandro Del Vecchio takes command on vocals in "You And I" and he delivers a great hard rock tune and one of my personal favorites. Check out, also, the hard hitting anthem of "Lost Time (Not To Be Found Again)" that features Dino Jelusic on vocals. Man, this is just perfect hard rock stuff and Jelusic's performances are top notch!!

All in all, this is an overall great album all the way. Tony Hernando (Lords Of Black) is an extremely talented and gifted musician. Along with Tony's talent, we have some of the best shouters of today's melodic hard 'n' heavy scene and, at the end, the result is just brilliant. If you love guitar-driven melodic hard rock stuff or if you are a fan of bands such as Hardline, Revolution Saints and Perfect Plan, then my advice is to add Restless Spirits debut to your collection.

Posted by Heavy Paradise
at Saturday, May 11, 2019 Labels: melodic hard rock
Email ThisBlogThis!Share to TwitterShare to FacebookShare to Pinterest