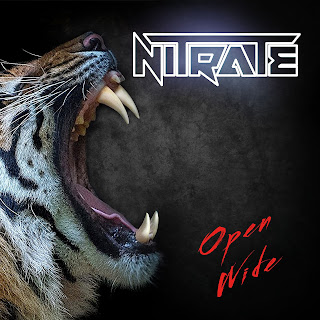 NITRATE is a band that last year released its debut opus "Real World", through MelodicRock Records, and made some noise around its name with its classic hard rock sound. That was a solid debut overall and it included some really catchy and well-crafted songs that recalled the sound of bands such as Bon Jovi, Def Leppard, Danger Danger, Midnite City and the list goes on and on.

The new album kicks-off with a really ass-kicking song; "You Want It You Got It". A 'smokin'" heavy rock track with a strong as hell rhythm section, powerful vocals, edgy guitars and a chorus line to die for! Excellent start! In "Night Time City" the band delivers yet another classic hard rock song. More in a early Danger Danger vibe this one is among my favorite tunes out of "Open Wide". "Only A Heartache Away" sounds like it jumped out from Midnite City's latest album while in "Heart Go Wild" we have THE absolute highlight!! Punchier, almost heavy, with tons of attitude "Heart Go Wild" must be played on a maximum volume! "I Don't Want To Live" is a melodic hard rock perfection, "Never Surrender" rocks big time and with "Heartbreak Suicide" doesn't get better than this! The power ballad of "In The Night" could be a major hit from bands such as Trixter or Bon Jovi and "Bad Girls" includes a nice groove in it. The last two songs, "Shot In The Dark" and "Waiting On You", are two more great samples of Nitrate's newest effort.

NITRATE with their brand new "Open Wide" deliver a monster of an album, Catchy as hell with a million dollar bucks production record that includes only killer songs. In my humble opinion "Open Wide" sets the candidate for the best album of 2019 so far. If you love the mid-80's, early 90's, sound and bands such as Trixter, Bon Jovi, Danger Danger and Hardline, then you must add this to your collection!!!

Posted by Heavy Paradise
at Wednesday, May 08, 2019 Labels: hard rock
Email ThisBlogThis!Share to TwitterShare to FacebookShare to Pinterest