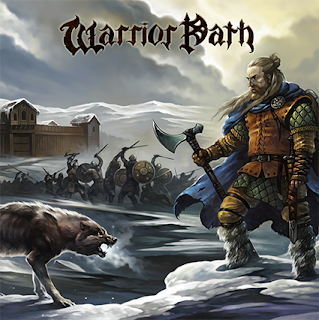 Warrior Path is the new amazing and sensational record for the fans of Epic Melodic Power Metal fans. Formed by Greek songwriter/guitarist Andreas Sinanoglou and surrounded by the very talented producer & musician Bob Katsionis (Firewind/Outloud/Serious Black) and one of Europe’s best and upcoming singers Yannis Papadopoulos (Beast In Black), Warrior Path is ready to unleash a killer debut opus.

According to producer Bob Katsionis: “On our very first meeting in my studio, I asked Andreas if he brought any demos, rehearsal material or a Cubase/Guitar Pro project. He told me: “I have the whole album in my head since I was 18 years old. I have never ever recorded anything, and anyone who tried to help me, failed. I know exactly how I want this album to sound like and -for a strange reason- I’m sure you’re gonna make it work”

The missing piece of the puzzle was the lead singer. Yannis Papadopoulos, from Beast In Black, was the chosen one to perform the vocals and finally Warrior Path took flesh and blood. After a couple of spins, I have to say that this opus is a killer one. Classic and old school power metal stuff which tells different stories about War, Pirates & Warriors that the sure thing is that will please every single fan of this particular scene.

After the opening epic and 7-plus minute long, tune of "Riders Of The Dragons" comes my personal favorite track out of this debut with the title "The Hunter". I totally love this one. The 'smoking' guitars along with Papadopoulos' powerful performances they are causing me shivers. Everything here 'smells' old-school power metal stuff from miles away. "Stormbringers", "Fight For Your Life" (which reminds me a bit of Manowar's earlier works...) and the heavier "Mighty Pirates" are all excellent samples of Warrior Paths' music; guitar driven, powerful, emotional and heavy!!! One of the best moments here is without any doubt the breathtaking tune of "The Path Of The Warrior". The slower and melodic parts here along with the heaviness and the excellent chorus make this song an absolute gem!!

I think that the fans of earlier Manowar, Blind Guardian and Helloween works will find their shelter with this release. Ladies and gentlemen this is an album that could have easily been released back in the 80's! I'm not kiddin' ; a true melodic power metal opus that includes killer performances, high-skilled guitars but, most of all, it includes this classic earlier vibe that will be appreciated by the fans of old-school metal. Even the artwork (created by Bulgarian artist Dimitar Nikolov (Ross The Boss, Sacral Rage, Wisdoom and more) refers to those days!