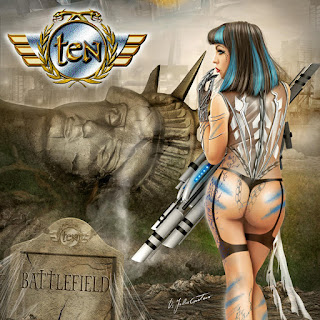 British melodic hard rock giants TEN to release 'Battlefield' with all the TEN songs from their Rocktopia Records period – including all the Japanese bonus tracks and exclusive EP tracks - onto one Limited Edition double CD release (500 copies only) with an exclusive cover by Gaetano Di Falco and sell for the price of a single CD on June 17, 2016 via Rocktopia Records.

As well as TEN fans, hard rock fans who have not previously bought their albums should hopefully be tempted to check them out with such a Value For Money release.


Tracklisting 'Battlefield':
DISC ONE – “ALBION”
1. Alone In The Dark Tonight
2. Battlefield
3. It’s Alive
4. Albion Born
5. Sometimes Love Takes The Long Way Home
6. A Smuggler’s Tale
7. It Ends This Day
8. Die For Me
9. Gioco D’Amore
10. Wild Horses
11. Good God In Heaven What Hell Is This †
12. The Prodigal Saviour *
13. Is There Anyone With Sense *
DISC TWO – “ISLA DE MUERTA”
1. Buccaneers (Instrumental)/Dead Men Tell No Tales
2. Tell Me What To Do
3. Acquiesce
4. This Love
5. The Dragon And Saint George
6. Intensify
7. Karnak (Instrumental)/Valley Of The Kings
8. Revolution
9. Musketeers – Soldiers Of The King *
10. Angel Of Darkness
11. The Last Pretender
12. We Can Be As One
13. Assault And Battery †
† Japanese Bonus Track * Exclusive EP Track
Signed to Rocktopia Records back in 2014, in a similar fashion to their one-two release of their much lauded debut and follow-up 'Name of the Rose' in a 6 month period back in 1996, 'Albion' and 'Isla De Muerta' were released in November 2014 and May 2015 respectively. Both albums gained highly positive reviews with Gaetano Di Falco's wonderful art making striking covers. 2015 also saw the release of the 'Dragon And Saint George' EP which contained 3 exclusive bonus tracks.  'Albion' now completely sold out.
www.tenofficial.com
www.facebook.com/tenofficial
www.rocktopiarecords.com

Posted by Heavy Paradise
at Monday, May 30, 2016 Labels: news 2016
Email ThisBlogThis!Share to TwitterShare to FacebookShare to Pinterest