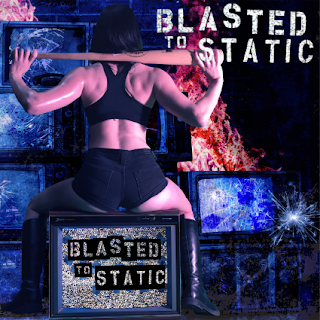 Blasted To Static is a true blast from the past! It's a band that reviles the U.S. metal sound of the late 80's with a fresh and updated approach. The guitars are really breathtaking thanks to Marshall's inspired and heavy riffs and solos, the vocals of Martin are top notch and in-your-face and the rhythm section is solid.

After the furious and heavy opener "Suicide King" comes the groovier and very Lynch Mob-esque "The Hammer". Man, this is a true U.S. heavy rock gem with a big and bad-ass groove in it that takes no prisoners. The guitar riff is out of this world and Martin's performances are the cherry on top!!! In "Lovesick Blue Pt.1" the band shows its bluesier and mellower side while in "Requiem Pt.2" Marshall unfolds his endless talent!! "Nottingham Grove" is yet another incredible tune out of the new record that reminds me a bit of Badlands first two albums.

This is a hell of an album; Blasted To Static is like a hand grenade that is ready to explode and blow you away with its classic metal sound!! For the fans of guitar driven U.S. Heavy Rock/Metal sound, this is a must have!

Posted by Heavy Paradise
at Sunday, May 29, 2016 Labels: classic metal
Email ThisBlogThis!Share to TwitterShare to FacebookShare to Pinterest