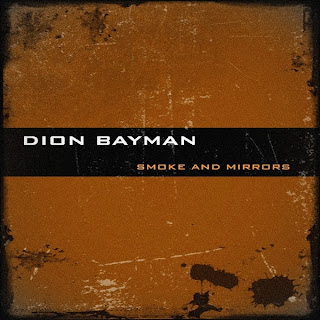 To be honest, I havenever heard the name of Dion Bayman till now that I received the promo package of the artist's new album with the title "Smoke And Mirrors". Dion Bayman is a singer and songwriter and from the age of six he started classical piano lessons with the Australian Music Examinations Board and he continued these lessons for the next eleven years becoming an accomplished pianist.

Later Dion began writing and recording his own songs but, also, performed as a singer in some local bars. His entertaining live shows made him very popular and garnered a large and loyal audience. Due to the excellent musicianship and increasing popularity of his respective bands, Dion has supported many acts such as The Choirboys and Ian Moss to name a few.

Dion Bayman's music is simple, with very nice melodies and harmonies, superb arrangements and, most of all, strong performances. The songs are all well-crafted with a modern pop-rock or even an AOR-ish, in some parts, direction with nice choruses and an overall good guitar work. "Here I Am" is the opening track and it's a really nice starter with an up-tempo, feel-good, vibe in it. "All That I Am" features a 'punchier' guitar riff and reminds me of Bon Jovi 's later works. The chorus is pure heaven and it's among the highlights from this record! "Over To You" is another Bon Jovi-esque track with an amazing melody and a chorus to die for!! "The Only One" is another very good up-tempo rocker while "Gone"  features a 'punchier' sound with a nice groove in it and a monstrous and memorable chorus line! "Someday" and "Change" are both very good songs with strong arrangements and Bayman's emotional vocal performances. Next, "Everything" is simply stunning; up-tempo with a cool guitar riff and a catchy chorus line. "All My Life" and the last one, "Turn Back Time", are two more great samples of Dion Bayman's music. Bottom line is that this is an extremely interesting record. A kinda of relaxing album, perfectly balanced between the rockers and the mid-tempos, "Smoke And Mirrors" comes to offer to us a strong release and one of the biggest surprises of this year. Moving somewhere between AOR and modern rock, this effort will grab you from the very first spin and will leave you hungry for more!! Well done!
Heavy Paradise's Rating : 8,5/10