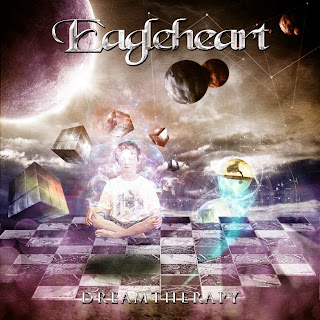 Hailing from Brno, Czech Republic, Eagleheart is one of the most promising new forces in the current Power Metal scene. Their debut album, ‘Moment Of Life’ (2008) gained an excellent response from fans and critics alike, leading them to energetic live performances as a support band for names like W.A.S.P., Blaze Bayley and André Matos to name a few, not to mention the fact that they also appeared in some of the biggest Czech Metal festivals such as Masters Of Rock and Benátská Noc where Eagleheart played for thousands of fans.

So, "Dreamtherapy" is the band's second album produced by Roland Grapow (Masterplan, ex-Helloween) and it can be described as a big step forward in every direction; heavier, mature and faster than ever! "Insomnia' is an instrumental track and with "Shades Of Nothing" we have a serious power metal example with soaring vocals, heavy guitars and aggressive backround voals. A fine example of what this band is capable of offering! "Taste My Pain" continues in the same furious heavy tempo while "Lost In The Deadland" has a nice melody, cathier chorus line and a huge solo in the middle! Great stuff! "Creator Of Time" has a 'groovier' metalic sound with some low-tuned guitars and a 'modern' touch! "Nothing Remains" features some very melodic key lines, laid-back vocals and shows the band's mellower side. One of my favourite tracks from this new album. "Dreamtherapy" and "Burned By The Sun" are both good power metal tracks with strong performances and heavy guitars.

I have to say that I really enjoyed this album. This band has a strong musicianship that reflects to their music. The songs are all well-crafted with passionate performances and overall good guitar work. A couple of tracks impressed me and I think that this band in some years from now they can be in the elit of this gerne.