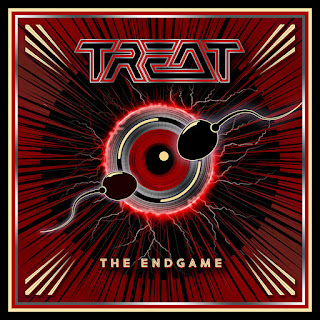 Swedish melodic hard rock heroes TREAT are back with their brand new, and ninth official full-length, opus entitled "The Endgame". The new effort is going to be released through Frontiers Music this April.
With bassist Nalle Påhlsson (who appeared on the huge "Coup De Grace" record) back in the ranks, vocalist Robert Ernlund, guitarist Anders ”Gary” Wikström, drummer Jamie Borger, and keyboardist Patrick Appelgren have once again set a course for yet another exciting and extremely melodic musical journey.
"We always want to make albums that are better than the last one. The album title, to me, represents many things about Treat in this day and age, including the sincerity and history of the band. But also the fight to survive as a band like brothers in arms, through all these years of highs and lows, tears and laughter. Seriously, we grew up together in the '80s, learning how to make our brand of Melodic Hard Rock by heart and we still continue to work that hard even today. We're as close as a family and we're blessed to still be able to get in the ring and be on top of our game," says guitarist Anders Wikstrom.
The new record kicks-off with the breathtaking tune of "Freudian Slip".  A track that sounds like it jumped out from "Coup De Grace" effort. The melody, the arrangements, the ultra-commercial chorus and everything in general here is simply awesome!! A true highlight out of the new album and for damn sure a great apetizer of what's coming next! The heavier tunes of "Rabbit Hole", "Sinbiosis" and the more AOR-ish "Home Of The Brave" are all three classic TREAT songs with tons of harmonies, memorable choruses and some really tasteful guitar licks for your ear pleasure only!
One of my personal favourite tracks out of the new opus is the moodier and more straight-forward "Both Ends Burning". I just love the 'darker' and edgier approach here along with the huge chorus line that stuck in my mind! Excellent! The beautiful ballad "My Parade", the solid "Wake Me When It's Over" and the power mid-tempo "Magic" are all great samples of pure melodic hard rock bliss! The album closes with yet another AOR hymn; "To The End Of Love"!!
Bottom line is that if you are a long time die-hard of TREAT, then you have to add this new gem to your collection asap! If you are a true fan of high-quality melodic hard rock music or you love the rock scene in general, then look no further; "The Endgame" is one of this year's best releases, period!
Songwritting : 10
Production : 10
Songs : 10
Musicianship : 10
Overal Rating : 10 / 10
Social Media:https://www.facebook.com/treatofficial/https://www.instagram.com/treatnewshttps://twitter.com/TREATtheband