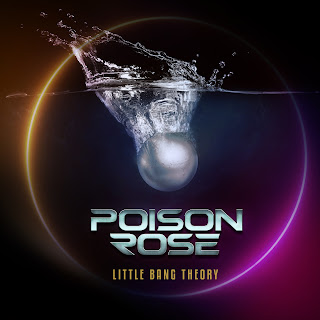 Poison Rose is a new project centered around vocalist Marco Sivo (Gioeli-Castronovo, Lovekillers feat. Tony Harnell, and Sweet Oblivion feat. Geoff Tate), a songwriter and backing vocalist on multiple releases from the Frontiers label.
Marco Sivo has featured, also, as backing vocalist on all of the Hell In The Club albums released by the Frontiers label and on “Lifeblood” by Secret Sphere. Frontiers' President Serafino Perugino wanted to put him on the spotlight and showcase his talents as a songwriter and singer, thus Poison Rose was born. The debut album, "Little Bang Theory" is going to be released through Frontiers Music this April.
Except Marco Sivo in Poison Rose we, also, find Andrea Seveso (guitars), Aldo Lonobile (guitars), Alessandro Del Vecchio (bass & keyboards and backing vocals) and Edo Sala (drums).
The new album features eleven solid and very melodic hard rock tracks that will please the fans of the Euro melodic hard rock/metalic AOR scene. Songs such as "Devil (Knock On My Door)" which reminds a lot of Hell In The Club, the heavier "Hearts Beat Loud", the melodic " Eternally, Wild And Free" and the two great rockers of "River Of Dreams" and "All Along The Way" are all solid samples of yet another extremely interesting release by Frontiers Music. Check it out!
Songwritting : 8
Production : 8
Songs : 8
Musicianship : 8
Overall Rating : 8 / 10