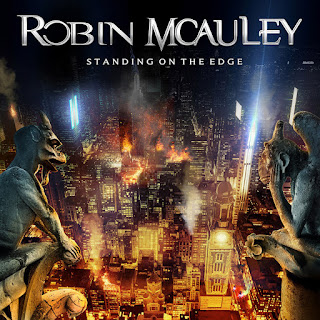 One of the most respected musicians/singers of the rock scene in general is without any doubt Robin McAuley. His soulful, powerful voice is synonymous with big records of the golden rock era and bands such as GRAND PRIX, and THE MCAULEY SCHENKER GROUP.
Last year, Robin McAuley returned to music business with a supergroup, Black Swan, and put a smile upon the face of every rock fan out there. Nowadays, McAuley is back with his brand new solo effort entitled "Standing On The Edge" that is going to be released through Frontiers Music.
The new opus except Robin on lead vocal also features Andrea Seveso on guitars, the mighty Alessandro Del Vecchio (on bass, keyboards, backing vocals), Nicholas Papapicco on drums and Howard Leese (guitars on “Supposed To Do Now”).
"Standing On The Edge" envisioned, overseen, and creatively directed by Serafino Perugino, President and A&R director of Frontiers Records with production (and co-writing) by Alessandro Del Vecchio, McAuley offers up a true gem of an album. In this brand new effort we see a splendid songwriting collaborations with his former Grand Prix bandmate Phil Lanzon (currently longtime Uriah Heep keyboardist) on “Like a Ghost”, Howard Leese (of Bad Company, ex-Heart) on “Supposed To Do Now," and Tommy Denander on “Do You Remember” and "Chosen Few”.
"Standing On The Edge" is a true gem of an album; is an opus that will be a future classic, no doubt 'bout that. Songs like the melodic perfection of "Late December", the breathtaking AOR-ish "Do You Remember", the fantastic straight forward "The Choosen Few" or the melodic hard rockers "Wanna Take A Ride" and "Like A Ghost" are all classic tunes filled with big and emotional melodies and superb performances.
As I alredy mentioned above, Robin McAuley's newest opus "Standing On The Edge" is a true gem and one of this years highlights. Every little thing here is flawed to perfection!! The last thing that I have to add here is that "Standing On The Edge" is a killer no filler effort that every rock fan should add to his collection.
Songwritting : 9
Production : 9
Songs : 10
Musicianship : 10
Overall Rating : 9,5 / 10