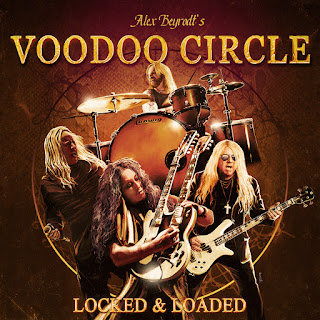 One of the most anticipated 2021 releases is the brand new VOODOO CIRCLE opus. With David Readman back on board, the long die-hard fans of the band but, also, the fans of the quality bluesy heavy rock know exactly what to expect; ass-kickin'. hard riffing, bluesy and melodic heavy rock stuff!!
As a long time fan of this band (with Readman on vocals), I was very curious about this new album. After the very first spin of "Locked & Loaded", all my expectations were fullfilled. "Locked & Loaded" is exactly what I've expected from these guys. David Readman on vocals, Mat Sinner on bass, Markus Kullman on drums and the amazing six string 'magician' Alex Beyrodt on guitars overcame themselves and delivered yet another amazing opus.
After the fast-furious opener of "Flesh And Bone", it comes the bluesier and very Whitesnake-esque "Wasting Time". I couldn't imagine better start! Both tracks are super delicious and filled with solid arrangements, soulful vocals by Readman and, of course, clever guitar licks by Beyrodt. Some classic and more late 70's hard rock stuff with "Magic Woman Chile" and "Locked & Loaded" while in "Straight For The Heart" we have a song that could easily appear in Whitesnake's '1987' record. Amazing!!!! The soulful and emotional ballad of "Eyes Full Of Tears" is simply breathtaking and it includes a killer guitar solo by Alex Beyrodt and it's among the highlights out of this new album. The groovier and edgier "Trouble In The Moonlight" is yet another winner and "Children Of The Revolution" closes this new opus with a perfect way. 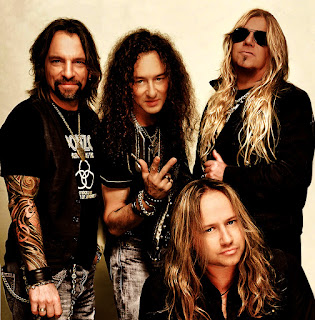 If you love this band and its previous recordings, then "Locked & Loaded" is a must add to your collection. If you love classic bluesy hard rock or Whitesnake, then this album will make your day. KILLER OPUS!!
Songwritting : 9
Production : 9
Songs : 10
Musicianship : 10
Overall rating :  9,5 / 10