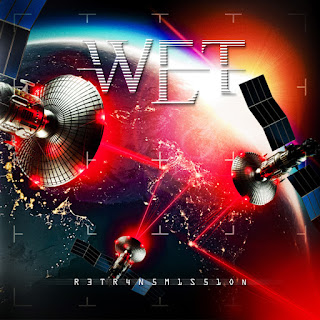 It seems that 2021, musically speaking, starts with a killer release!! Yes, the super group of W.E.T. is finally releasing their brand new opus entitled "Retransmission" . The new album is going to be released through Frontiers Music on January 22nd.
W.E.T. took its name from three amazing bands; Work Of Art (Robert Sall), Eclipse (Erik Martensson) and Talisman (Jeff Scott Soto). The lethal combination between the sound of the above mentioned bands create a unique sound that can't be indifferent by any fan of the hard rock sound in general. After three solid and ultra melodic efforts, its time for W.E.T. to release their best record to- date and, for damn sure, a future classic by any meaning!
The opening tune of "Big Boys Don't Cry" is a fast-paced heavier melodic rock thunder that features a killer chorus line, thundering drums, sharp guitars and a chorus line to die for! Next, in "The Moment Of Truth" we have yet another solid rocker which is movin' in a more ECLIPSE-esque paths while in the "Call Of The Wild" W.E.T. is delivering a simply fantastic modern, super catchy and powerful song.
"Got To Be About Love", the second single, it is a straight forward melodic rock anthem that includes a huge hook line enough to sing-a-long for days. Soto's vocals really shine on all over the song and the harmonic parts in this song are out of this world. Excellent stuff! "Beautiful Game", the epic and bombastic "How Far To Babylon" and the commercial "Coming Home" are three more solid samples out of this brilliant release.
"What Are You Waiting For" is the first, and only, ballad out of "Retransmission". A cool and moodier song with a lovely melody in it. The rythmic and up-tempo tune of "You Better Believe It" is good while in "How Do I Know" we have another highlight here. Groovier with some tasteful guitars and Soto's unique vocals in front row. The new album is closing with probably the best tune out of "Retransmission"; "One Final Kiss" is just KILLER!!! A totally harder edged rocker with a catchy as hell chorus line and some crazy guitar solos that will blow you away!!!
The new W.E.T. album is just killer, up-beat, super catchy, powerful and in-your-face melodic heavy rock at its highest order!! So, fasten your seat bealts and let W.E.T. rock your world!!!
Songwritting : 10
Production : 10
Musicianship : 10
Songs : 10
Overall Rating : 10 / 10