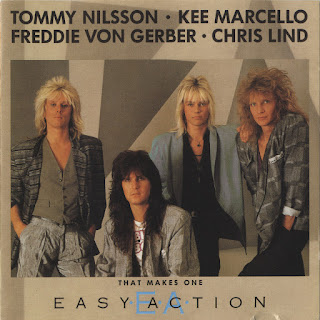 It all started somewhere in the early 90's when I visited Russia for concert reasons ...

So, with the guides, in addition to countless visits to major religious, scientific, archaeological sites, we visited, as musicians, a big record store in the heart of Moscow. Among the albums I bought, mainly of folk interest, I picked up Deep Purple's "Singles A's and B's", Europe "Prisoners in Paradise" and one I had never seen in Greece before Easy Action's (that featured guitarist Kee Marcello) "That Makes One". The release company for all three albums was the former USSR monopoly label Melodiya!

Kee Marcello, who later joined Europe, received a proposal from bassist Peo Thyrén from the pop punk band of Noice to be the lead singer. At the end, Kee ended up to be the band's producer.

The band's sound is somewhere between Mötley Crüe and Poison but after the line-up changes the sound changed to melodic rock/AOR. The most improtant change was the arrival of  Björn "Nalle" Påhlsson and Tommy Nilsson that took over the lead vocals after Zinny's departure.

The gorgeous ballad of "In the Middle of Nowhere" stands out as a sample of exquisitely dynamic, melodic lyrics with superb vocal performances.  Another memorable ballad is without any doubt the "There Is A River" from the single "Talk Of The Town" (which is included as a bonus track).  "Talk Of The Town" is a very Toto-esque and opens the album with a terrific, soulful vocal interpretation, rich keys and, of course, the typical 80s Scandinavian melodic sound.

The personal favorite, "Teachers Do It With Class", where  Tommy Nilsson's vocals are top-notch is the "Swedish answer" to Michael Bolton's earlier works. The sing-a-long and ultra melodious tune of "Code to your heart" with its dreamy keys and melodic interpretation is the apotheosis of the melodic AOR.

Check out also the "One in a Million", "Partners in Crime", "Love Reaction", "Talk, Talk, Talk" and "Rosie" that all are unique compositions of exceptional aor-tastic Scandinavian melodic rock stuff.

Bottom line is that if you are a fan of this particular music genre, then this is your "music ticket" to melodic paradise!!! Reprinting is limited to 1000 copies so all you melodic freaks hurry up to make a New Year gift to yourself. For me, the "gift of the elder" came 30 years ago!!!

Reviewed by Notis "Teachers Do It With Class" Gillanidis