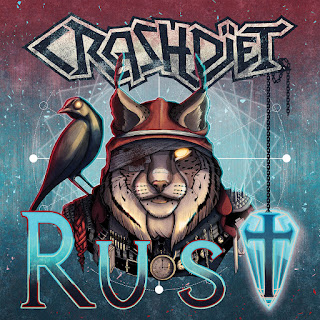 Crashdiet is a band that since its creation, back in 2000, has gone through some serious and big changes, no doubt about that. With their debut opus back in 2005, "Rest In Sleaze", Crashdiet achieved to build a strong reputation around their name. That was a damn solid and old-fashioned sleaze metal album that since now it's a classic among the fans of this particular scene and sound.

But death knocked the door of Crashdiet shortly after the release of "Rest In Sleaze". The band's frontman Dave Lepard (R.I.P.) was found dead in his home after committing suicide. After this loss, the rest of the band decided to continue. The band's next record "The Unattractive Revolution" saw a new lead shouter, Oliver Twisted, on board. That was, inmho, a great follow up to the classic "Rest In Sleaze" opus. "Generation Wild" and "Savage Playground" with Simon Cruz on vocals were both strong efforts but unfortunately didn't achieve to make Crashdiet big.

Nowadays the band returns to the scene of the crime with its brand new record entitled "RUST" through Frontiers Records. To be honest, and after a couple of spins, I like the new album a lot. It's in a classic hard rock way and includes some killer tunes in it. The new singer, Gabriel Keyes, does an amazing job regarding of the vocals and the band sounds tighter than ever.

The first four songs of "RUST" (RUST, INTO THE WILD, IDIOTS and IN THE MAZE) are all just great hard rock stuff with big riffs, a nasty groove sound in it, powerful n' in-your-face performances and all four songs are just what the doctor ordered. With "Crazy", Crashdiet delivers one of the best songs out of the new album. Powerful with attitude and a chorus line to die for. Man, I just love this one!! In "Waiting For Your Love", we are dealing with a very good ballad. This one reminded me a bit of Skid Row's power ballads back then. For sure another highlight out of "Rust". It's time to put more 'guts' and attitude with the fast-paced and more 'metalized' tune of "Reptile". Killer stuff!!

I think that Crashdiet strikes back with a killer record all the way. "Rust" will make the die-hards of the band extremely happy, that's sure. "Rust" will gain also some new hard rock/metal fans with its attitude, powerful sound and its tight as hell musicianship. If you love bands such as early Motley Crue, Skid Row, Shotgun Messiah or you are a fan of Crashdiet, then look no further.......CRASHDIET IS BACK FOR GOOD!!!