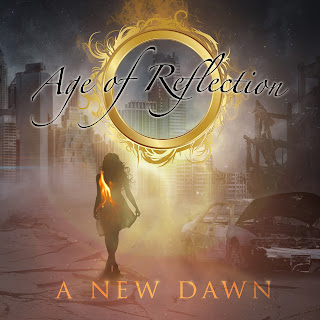 Back in 2017, a new melodic rock band saw the light of day; Swedes Age Of Reflection released an amazing debut opus entitled "In The Heat Of The Night" and filled our hearts with strong emotions, melodies and a promise that this band will be bigger in the near future.

Nowadays the time has come for Age Of Reflection to release its brand new record. The new album is entitled "A New Dawn" and believe me it's a killer one. The band of Age Of Reflection consists of  Carl Berglund (guitars, backing vocals), Lars Nygren (lead vocals), Jan Skärming (bass), Jens Rüttgeroth (keyboards), Jonas Nordqvist (lead guitar) and Peppe Vikman (drums).

After the intense intro of "Aurora", it comes the first song of the new album which is one of the best tracks of the new album. "A New Dawn", the opener, is simply breathtaking. Heavier but with a monstrous melodic line in it and a huge chorus "A New Dawn" put us immediately into the mood of the new album. Next ,we have another big and powerful rocker; "Stay With Me" kicks-off with a fantastic guitar riff and turns into a melodic hard rock gem. The chorus line here is once again candy in my ears!!

"Here I Stand", "Until Death Do Us Part" and the fast-paced tune of "Go" (with its monster hook n chorus line) are all three superb samples of Age Of Reflection's music. The commercial "Never Alone Again" is one of my personal favorites out of "A New Dawn" while in "I Just Died.." we have a great cover of Cutting Crew's big hit!! I think that Age Of Reflection took this little gem, kept all the original magic, put their own identity and at the end made a hell of a job!! Classic! I loved also the heavier "Write It On The Wall" and the song that closes this fantastic record (Can't Let Go).

Ladies and Gentlemen we have a clear winner here; Age Of Reflection is back in business with a great album all the way. "A New Dawn" is for sure a 'new' start for this amazing band and for damn sure this one will be a future classic! Heavier than the debut with bigger melodies, harmonic lines to die for and choruses to sing-a-long for days! All the songs here are pure melodic rock/hard rock paradise and there's no filler in sight! Age Of Reflection with "A New Dawn" will be among my Top 5 albums of 2019.......