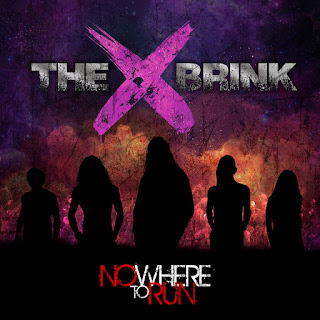 Over the last years Frontiers Music introduced us some excellent new Brit Hard Rock bands. Wayward Sons, Inglorious, Bigfoot and Doomsday Outlaw are some of the bands that impressed fans and music press. Of course, there are numerous other bands, such as the amazing VEGA that is hailing from U.K., rocks big time and needs to be paid attention. The latest discovery from U.K. is THE BRINK and their debut opus entitled "Nowhere To Run".

After a couple of spins of this new record, I have to say that I enjoyed every single moment of it. Classic heavy rock stuff and to be more specific classic and raw heavy rock stuff with attitude that the sure thing is that will make some noise out there.

The first couple of songs, "Little Janie" and "Break These Chains", are both fistful hard rock with some NWOBHM influences, crunchy guitars and powerful vocals thanks to the band's lead shouter Mr. Tom Quick. "Never Again" is a cool up-tempo and more punkier tune that includes a catchy hook and chorus line and of course a tasty guitar solo. The modern "Save Goodbye" is among my favorite tracks while in "One Night Only", "Said And Done" and the punchier "Don't Count Me Out" The Brink deliver some excellent, powerful and with a big groove hard rock songs that impressed me! "Nothing To Fear" is yet another killer track out of this debut. Imagine Bullet For My Valentine (!!!) at their best (melodies, catchiness.....) and you'll get the picture here. Killer song, just killer! "No Way Back" rocks in an old-fashioned way while "Burn" is made for big arenas!

It seems that with Frontiers' newest discovery, The Brink, we have yet another great release to look forward to listening. A bunch of some killer hard rock tracks filled with attitude, melodies, big n' loud guitars and great arrangements consists this surprisingly good opus.

Posted by Heavy Paradise
at Wednesday, May 15, 2019 Labels: hard rock
Email ThisBlogThis!Share to TwitterShare to FacebookShare to Pinterest