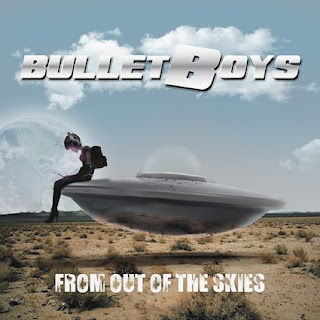 For me, the three first albums by Bulletboys are all classic! Period! U.S. Hair Metal at its best with powerful and in-your-face vocals, catchy n' heavy songs and with lots of attitude. After that, the band continued to release albums but, to be honest, I've lost my interest.

Nowadays, Marq Torien and his Bulletboys are back in business with a brand new opus which is entitled "From Out Of The Skies".

From the very first spin of this new Bulletboys record, one thing is clear; this ain't the classic Bulletboys sound of the first three albums. It's updated, it's modern and the one thing that reminds of their glory days is Marq Torien.

The first three songs of the new opus (Apocolypto, D-Evil and From Out Of The Skies) are modern and solid hard rock stuff but nothing really spectacular. "Hi-Fi Drive By" is the album's best track (...so far). It's a groovier rocker that includes a nice beat, a feel-good vibe in it and a more commercial sound. The acoustic semi ballad tune of "Losing End Again" is very good while in the Red Hot Chili Peppers-esque "Sucker Punch" the band delivers yet another interesting song.

Bulletboys marks their return in music business with a solid album all the way. Maybe their 'old' fan-base (including me) wanted a return to their roots opus but that's ok, no problem, if you ask me. They had their chance back in their hey days and they lived the rock n' roll dream to the full. They don't have to prove nothing to anynone. It's just a rock n' roll band that lives in 2018!!!