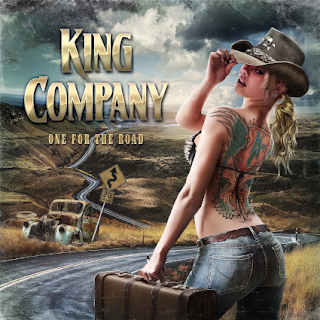 King Company is a new melodic hard rock band that originally was formed in 2014 by drummer Mirka "Leka" Rantanen (Raskasta Joulua, Warmen, ex-Thunderstone, ex-Kotipelto, etc.). He gathered people that he had worked with before and who he considered both good musicians and friends. So with Pasi Rantanen (vocals), Antti Wirman (guitars), Jari Pailamo (keyboards), Time Schleifer (bass) and Mirka Rantanen (drums) the puzzle was complete.

The band’s original name was No Man’s Land. Bursting with enthusiasm, the band started to work on their first batch of songs and in autumn of 2014 they entered the famous Astia Studio to record their first three song demos. The deal with Frontiers Records was a 'big' thing for the band and the two very successful gigs in Helsinki and Jyväskylä showed the band's great abilities. They changed their name to King Company and nowadays the debut record "One For The Road" is finally a reality.

The band's sound recalls to the glory late 80's classic hard rock with powerful vocals, blistering guitars, 'big' drums and a totally ass-kickin' sound that will please all the fans of that era.

The opening tune of "One For The Road" is the perfect sample of what I mentioned above. A true hard rock gem in an old-fashioned way. "Shining" features more groove and the late 80's elements are once again obvious. For sure, another solid track out of the debut. At this point, I have to add that King Company's lead shouter, Pasi Rantanen, does an incredible work regarding the vocals. His rough and, at the same time, emotional voice 'bonds' each song and takes it to a higher level. "In Wheels Of No Return", "Coming Back To Life" and "Wings Of Love" we are dealing with three superb slices of pure 80's Hard Rock stuff at its best!!! All three songs are filled with this sweet U.S. sound and include powerful vocals, 'punchy' guitars and catchy hooks and choruses to sing-a-long. The Whitesnake-esque, and my personal favorite, "Desire" is simply killer!!!!!!

King Company with "One For The Road" achieves to release a killer and classic Hard Rock album!! No fillers, just pure Heavy Rock stuff at its best with an 80's vibe that the sure thing is that this album will be a fan favorite and a future classic of that era!!! A must have for every serious hard rock fan out there and especially for the fans of Whitesnake, Deep Purple, Lynch Mob and Dokken!!!