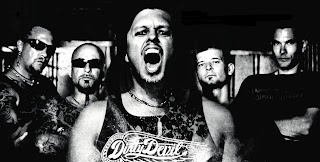 Michael Kopietz of Chainfist has this to say: “A lot of things has happened over the last year in Chainfist. The signing with Rock N Growl, line-up changes and new songs. Now It’s time to reveal some of the hard work and a new tune from Chainfist".

Sunday April 1st between 21:00 hours and 22:00 hours the Danish national radio (http://www.dr.dk/netradio/Metafiler/asx/DR_P6_BEAT_128.asx ) is going to do a exclusive worldwide premiere of our new single “Mass Frustration” in the Metal program “Sort Søndag” (which means “Black Sunday”), this song was recorded at Six String Studios with Søren Jensen behind the wheel and Mixed & Mastered by Jacob Hansen at Hansen Studios earlier this year, and is the first recording with the new lead guitarist Thomas Hvisel.

We are looking forward to present this badass song to the world of heavy metal. I don’t want to say too much about style and sound, but you’re in for a treat, this is for sure. Check it out here Sunday, April 1st 2012 on this station: http://www.dr.dk/netradio/Metafiler/asx/DR_P6_BEAT_128.asx  or go directly to http://www.facebook.com/DR.sort

Furthermore Chainfist is going to play the Danish version of Wacken Band Battle in Herning April 5th 2012 together with Death Metallers Dawn Of Demise and 4 other amazing Danish bands. (See full line-up here: http://www.fermaten.dk/index.php?pageID=592&subjectID=27439 ). So peeps, cya there if you’re in Denmark.

Metal that makes the world go round, your neck break and your body bounce. Nothing more nothing less.