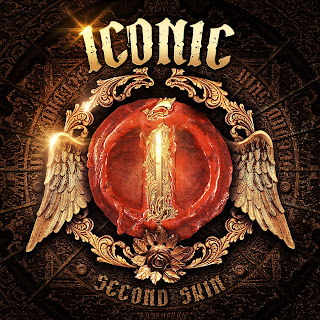 ICONIC is the brand new super-group presented by Frontiers Music and consists of Michael Sweet (guitars), Joel Hoekstra (guitars), Marco Mendoza (bass), Tommy Aldridge (drums), and Nathan James (vocals).
Michael Sweet is well-known from his work with legendary Christian Metal band of STRYPER. Guitar hero Joel Hoekstra currently of Whitesnake and Trans-Siberian Orchestra, is one of hard rock's premiere guitarists, whose fretwork is regularly praised and admired. The mighty Marco Mendoza (Thin Lizzy, Black Star Riders, The Dead Daisies, Journey)  and Tommy Aldridge, currently of Whitesnake, has also played with Ozzy Osbourne, Ted Nugent, and Black Oak Arkansas, among others, and he is considered one of the great hard rock drummers of all-time. The line-up closes with one of today's best performers; Nathan James (Inglorious).
Alessandro Del Vecchio is responsible for the production (with Michael Sweet) and also for the mixing/mastering of this new opus. Ale is also playing keyboards in "Second Skin".
As you can imagine, and already listen from three singles, ICONIC sounds bigger than life!! Classic hard rock with strong emphasis on big guitars, powerful performances, melodies and this classic hard rock sound to haunt every single moment of this record.
Songs like "Run, As Fast As You Can", the ultra-groovy "Second Skin",  the killer "Nowhere To Run" and the fantastic and melodic "Worlds Apart" are all some breathtaking samples of this super-group!!! Bigger than life arrangements, passionate vocals, a rhtyhm section solid as a rock and some incredible guitar lines by Mr. Hoekstra!! "All About" is a straight-forward hard rock gem while in "This Way" we are dealing with a brilliant and very commercial tune (and very Whitesnake-esque)!!!!
Sweet, Hoekstra, Mendoza, Aldridge and Nathan James are the ICONIC!!! A new super-group that with its debut record will set the Hard Rock world on fire!! With the helping hand of Alessandro Del Vecchio (production, mixing, mastering, keyboards...) "Second Skin" set the candidate for one of this year's best releases!!! A true hard rock album from a winning team!!!
Songwritting : 10
Production : 10
Songs : 10
Musicianship : 10
Overall Rating : 10 / 10
Produced by Michael Sweet & Alessandro Del VecchioMixed & Mastered by Alessandro Del VecchioExecutive Produced by Serafino PeruginoSocial Media:https://www.facebook.com/IconicRnR/