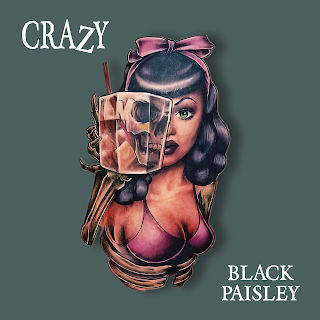 CRAZY will be released on all major streamingservices on the 29 th of April
The second single from the upcoming 4th album by Black Paisley. This time the band will release a new digital single every month up to the album release later in 2022
The new single “Crazy” shows again a softer side of Black Paisley, that haven´t really been seen since the first two albums. “A soft mid-tempo radio rocker with a good feel vibe to it. A modern version in the style of bands like Whitesnake, Journey and Bon Jovi. The song came about with the groove of a ballad, then we just added a little Paisley choruses and rock guitars says singer and songwriter Stefan Blomqvist”
https://www.facebook.com/blackpaisleys

Posted by Heavy Paradise
at Saturday, April 30, 2022
Email ThisBlogThis!Share to TwitterShare to FacebookShare to Pinterest