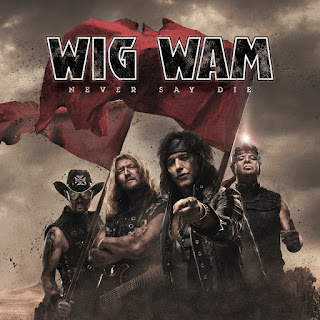 The Norwegian rock 'n' roll circus of WIG WAM is back in business with a brand new opus entitled "Never Say Die". The new album is going to be released through Frontiers Music this January.
Wig Wam is one of these 'love 'em or hate 'em' situation; I mean that with Wig Wam there's no in- between. With already four albums on their back, Wig Wam achieved to build a strong reputation around their name all those years. These glamsters have energy, passion, the nessecary catchiness and the 'right' image!!! After a long break since their last release, back in 2012 with "Wall Street". they're finally back in business to offer to us yet another up-tempo, in-your-face and extremly catchy effort.
I think that the "Never Say Die" is an album that will be loved by the die-hards of the band. Songs like "Never Say Die", "Shadows Of Eternity", "Where Does It Hurts",  "Dirty Little Secrets" and "Call Of The Wild" are all classic, maybe a bit harder edged, WIG WAM tunes filled with big and loud guitars, heartful vocals and a tight rhythm section enough to make you scream for more. There are, of course, songs in a more AMMUNITION (with Erik Martensson of Eclipse) direction like "Kilimanjaro", the beautiful "My Kaleidoscope Ark" and "Silver Lining" that makes the new effort very attractive for a wider range of rock fans.
All in all, WIG WAM's newest opus is very interesting all the way! A bit harder edged at places and more straight forward regarding the band's previous recordings but overall a very enjoyable ride. The glam days of Wig Wam are gone giving their place to a more hard rocking sound which I totally loved! I think that it's not hard to be a rock an' roller........
Songwritting : 8
Production : 9
Songs : 8
Musicianship : 10
Overall Rating : 8,75 / 10