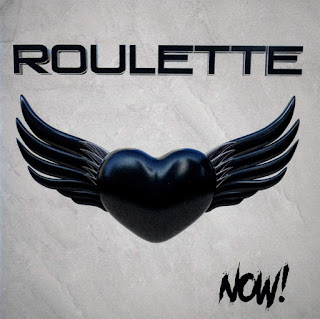 With their brand new opus,"NOW!", the Swedish melodic rock band of ROULETTE achieved to release another gem of an album that can't be missed by any fan of the quality melodic rock sound in general. And, if you loved the band's "Better Late Than Never" record then you have/must to buy this new one immediately.

"Now!" is one of these albums that you feel in love at once, there's no doubt about that. Killer songs along with these amazing vocal performances and these heavenly influenced harmonies, hooks and choruses that you'll be screaming for more. Thomas Lundgren's vocals are sensational and passionate while Magnus Nelin delivers some breathtaking, tasty and extremely melodic guitar lines.

The first couple of songs that kicks-off this gem of an album, "Never Enough" and "Keep On Dreaming", are both magical! Both bring back memories from bands such as Giant, ALIAS and Foreigner and both will make you sing-a-long for days. "Soldiers Of Love" is edgier and in a kinda of way modern regarding the first two amazing tracks but it's another great moment out of the new release.

"We Can Make It" is more commercial and features a so sweet melody in it while in "Better Day" Roulette delivers an edgier tune and, of course, one of the highlights of "NOW!". "Turn It Around" is one of these songs that I call melodic rock paradise!! Punchier with a huge chorus line that is build up for big arenas! Man, I just love this song. "The Only Way" and "Another Night" are both songs that will make each and every serious AOR fan happy!

Roulette with their brand new opus "Now!" set the candidate for the album of the year! "Now!" it's one of these records that includes only killer songs filled with heavenly melodies, harmonic lines to die for, passionate vocals, catchy as hell choruses and this mid 80's classic vibe in it. Classic stuff!