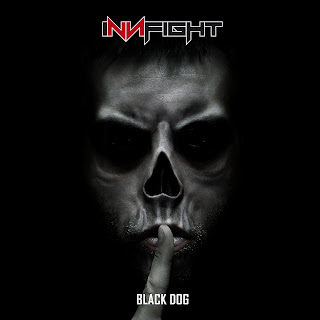 It's been already 2,5 years since the release of INNFIGHT's debut album with the title "Boulevard Of Pain". That was, and still remains, a very interesting slice of pure modern melodic metal stuff with some killer tunes in it, passion and powerful performances.

That was then, this is now and Innfight strikes back in business with their brand new opus which is entitled "Black Dog". Once again the band worked with renewed musician/producer  Rolf Munkes at Empire Studios and the result is once again solid.

The new album kicks-off with the modern melodic metal tune of "Not Me". Heavy guitars, powerful and 'pissed-off' vocals and solid arrangements compose the first track of "Black Dog". "Black Dog" is again a heavy song but with a more melodic approach while in "Get Up" the band delivers yet another very good modern metal song. I really love the 'moodier' and kinda of alternative pinches in each song so far. "Ought Of My Sight", "In Movement" and the excellent "Dead And Gone" are three solid samples of pure and modern melodic metal/alternative stuff.

Innfight with their brand new opus "Black Dog" come to prove that they are a band that has a lot more to offer in the near future. "Black Dog" is a mature album that includes all the power, attitude and inspiration to become a favorite among the fans of today's modern melodic metal/alternative scene.