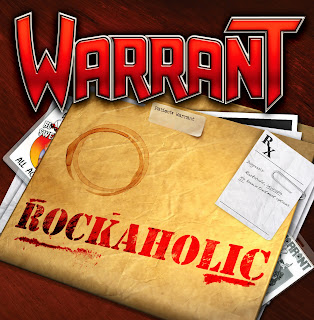 WARRANT is back! When the band's founding member and guitarist Erik Turner said to me in his interview with Heavy Paradise, : "We have a new CD of all original material coming out with Robert in May 2011". I was pleasantly surprised! You see, Warrant is a band that I grew up with their music and is one of my all time favourite groups from that era. Albums like their debut and "Cherry Pie" are still classics from that scene. "Dog Eat Dog" was a great effort too, but, after that they have released average recordings or even bad, at least for the band's standarts! They have changed Jani Lane, they hired Black N' Blue's frontman for one album and finally they end up to Robert Mason (ex-Lynch Mob, ex-Cry Of Love) as Warrant's lead shouter!

So, with Robert Mason on board the boys are back to offer a very good comeback album which is titled "Rockaholic". They teamed up with Frontiers Records, as so many bands from the past, and the result will please their long-time fans but, also, they will earn some new ones too. The sound of the album reminds the band's earlier recordings, even if in some parts the band rocks harder. They also put some modern hard rock elements. "Sex Ain't Love" is pure Warrant! It's up-tempo, nasty and sleaze and it's the big step to the new era! "Innocence Gone" it's a kinda of old school hard rock tune and a track which reminds me a bit of Mason's work in Cry Of Love. "Home" is a huge track! A mid-tempo/ballad track with an 80's melody and Mason's passionate performance. A track that could easily fit in any of the band's previous recordings. "Show Must Go On" and "Cocaine Fright Train" are both heavy rockers with big backround vocals, in-your-face guitars and Mason's passionate vocals! Great just great!! "Tears In The City" has a modern vibe in it but the final result is almost perfect. One of my favourite tracks from the new album.

All in all, this is a great comeback from Warrant! The boys are showing that they still got it and with albums like this new one they can play again to the super league! They have the songs, the attitude and the will to play what they love most...'ballsy' hard rock!

Posted by Heavy Paradise
at Sunday, May 22, 2011 Labels: hard rock
Email ThisBlogThis!Share to TwitterShare to FacebookShare to Pinterest