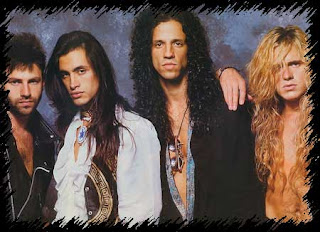 Extreme is an American hard rock band, headed by frontmen Gary Cherone and Nuno Bettencourt  that reached the height of their popularity in the late 1980s and early 1990s. Extreme was formed in Malden, Massachusetts, in 1985. Vocalist Gary Cherone and drummer Paul Geary were in a band called The Dream ("Extreme" is a derivation of Cherone and Geary's former band "The Dream", meaning "Ex-Dream"). Guitarist Nuno Bettencourt was in a band called Sinful, and bassist Pat Badger was playing with a Berklee-based outfit called In The Pink.
Following an altercation between the rival groups over communal dressing rooms, the four decided to form a new band together. The band singed to A&M Records in 1988 and they released their self-titled album in 1989! A very good debut album with some really great tracks in it. The final track on the album, "Play With Me," was used as the "mall chase" song in the film Bill & Ted's Excellent Adventure. 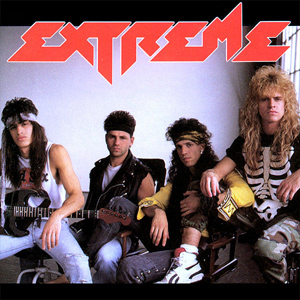 After the huge success of their debut, the band decided to release their second album. So, in 1990, they hired Michael Wagener as a producer and together they released the "Pornograffitti". A heavier album with some amazing guitar work, catchy songs and a solid production, "Pornograffitti" was and still is a classic release. "Decadence Dance" and "Get the Funk Out" were released as singles. "Get The Funk Out" reached number 19 in the UK charts in June 1991. Neither single was successful in the United States, however, and the album had fallen off the charts when A&M sent the third single to a number of radio stations in Arizona.
The acoustic-ballad "More Than Words" entered the Hot 100 on March 23, 1991, at Number 81. It later became a huge smash, hitting Number 1 on Billboard's Hot 100 in the United States. The subsequent single, "Hole Harted", another acoustic track, was also successful, rising to Number 4 on the same popular music chart.

The band began recording their third album in 1992. Their appearance at the Freddie Mercury tribute concert in April 1992 interrupted the recording sessions, but it gave the band considerable exposure beyond the heavy metal fraternity. "III Sides To Every Story" was released on September 22, 1992 and it was a great album! More mature but still 100% Extreme! The first single from the album was "Rest in Peace". The band was sued for plagiarism, but they quickly settled out of court, later releasing a new version of the clip. The album contained noticeable Christian themes, presumably put there by Cherone, who noted in interviews being interested in evangelical preachers 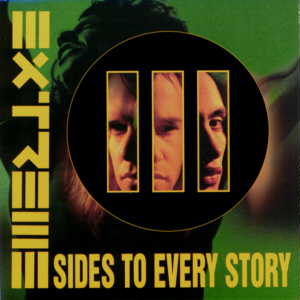 Prior to the band's appearance at Donington's Monsters of Rock festival in the summer of 1994, Mike Mangini (ex-Annihilator) replaced Paul Geary on drums, who left the band to pursue a career on the business side of the music industry, managing successful acts such as Godsmack. The first record to feature Mangini, "Waiting for the Punchline", was released on February 7, 1995. The singles "Hip Today", "Unconditionally," and "Cynical" were released, but the album sold less than III Sides to Every Story and Extreme disbanded in 1996, on amicable terms.

Extreme reformed for a short tour in 2004 playing in the Azores (August), in their hometown of Boston at the WAAF anniversary (Sept.19) as well as a few concerts in Japan (January 2005). After a hiatus during 2005, the band returned in 2006 with the "classic" Pornograffitti line-up to do a small, three-show reunion tour through New England. On November 26, 2007, the band announced plans for a world tour in the summer of 2008 with King's X as well as a release date for their new album, "Saudades de Rock", produced by Bettencourt. Kevin Figueiredo, who played with Bettencourt in DramaGods and Satellite Party, took over drum duties for the band. Original drummer Paul Geary is still involved with the band, albeit in a management position. 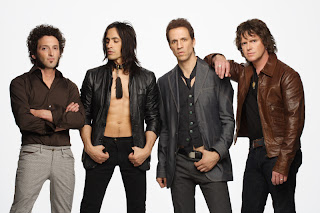 According to a December 2010 interview with singer G. Cherone , Extreme has been writing new material for their next album, which they plan to release sometime in 2011. Asked in the same interview if the band will produce the new album by themselves or get an outside producer, Cherone replied, "There's talk of a few people. It would be great to get an A-list name. I don't know if that happens. My dream producer would probably be Rick Rubin."