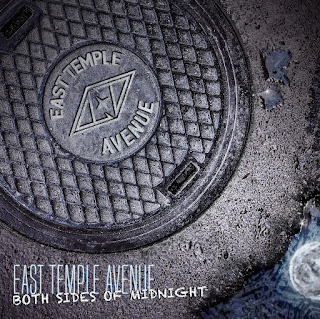 Now this is a release that I was very curious and anxious to listen to! After the solid 'debut' (under the name of Darren Phillips Project Vol.1) EAST TEMPLE AVENUE is finally ready to present us a really fantastic album which is entitled "Both Sides Of Midnight" . The new record is going to be released through AOR Heaven this November.
For those who aren't familiar with the name of East Temple Avenue, allow me to say that this is an all-star project/band that is helled by guitarist/songwritter/producer Darren Phillips. Darren achieved to gather an amazing list of guests such as P. Lindstrand, Dan Skeed, Dennis Butabi Borg, Bruce Kulick and the amazing Robbie LaBlanc as the lead singer and release an album and the sure thing is that it will be a classic among the fans of the classic AOR/Melodic Rock sound.
LaBlanc's smooth and silk vocals along the solid rhythm section and, of course, the quality of the songs take the final result into another level that will make you push the repeat button again and again! The opening tune of "Mountain" is pure melodic hard rock heaven and features a heavier and edgier vibe enough to make you turn the volume on maximum volume. "Don't Make Believe" (that was the second single that released in October 2019) is again a killer track! Melodic as it gets with a fantastic sing-a-long chorus line "Don't Make Believe" is simply breathtaking classic AOR. "Fool For Love", "Everything" and the ultra catchy and feel-good "When I'm With You" are pure melodic rock paradise!! "Forever Yours" and "Fly High" are both top-notch, up-tempo and in-your-face edgy AOR songs that will blow you away!!!
Bottom line is that East Temple Avenue with "Both Sides Of Midnight" deliver a huge melodic rock album all the way! The addition of Robbie LaBlanc as the band's lead singer is the perfect choice to take this opus to heaven! Great songwritting, a tight as hell musicianship, breathtaking performances and killer songs are the ingredients of this gem!!! If you love bands sucha as Survivor, Strangeways, Creye, The Storm and The Giant, then "Both Sides Of Midnight" is FOR YOU! Top stuff!
Songwritting : 9
Musicianship : 10
Production : 9
Songs : 10
Overall rating : 9,5 / 10