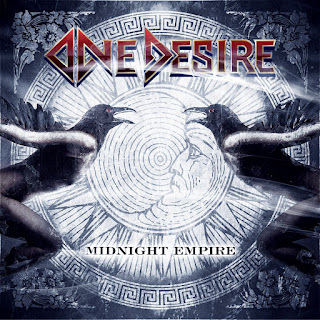 It was 2017 when a new band called One Desire made its appearance and blew up my speakers and my mind with its amazing debut opus.  Nowadays, One Desire strikes back with album number two with the title "Midnight Empire" that is going to be released through Frontiers Music in April 10th..

The first sample that I've heard and the first video single from the new record was "After You're Gone". A track that is pure melodic hard rock heaven!!! Everything here is perfect; the hook, the huge chorus line, the guitars and, of course, the passionate vocals by Andre Linman.

"Shadowman", the opening tune, kicks-off things here impressivly. A more straight forward melodic rock monster with a modern vibe and a moodier feeling in it that includes an explosive chorus line that takes no prisnores with!!! Next, we have "After You're Gone" that I have already mentioned above and with "Down N' Dirty" One Desire is delivering yet another superb and very AOR-ish gem.

But with "Godsent Extasy" we are dealing with a killer song all the way. Melodies to die for, harmonic lines that will haunt you for days and this chorus line to sing-a-long. "Through The Fire" kicks-off with an acoustic guitar, a slower tempo, Jimmy's (who handled the lead vocals) soulful performances and somewhere in the middle is gettin' heavier and powerful! A very diverse song but if you ask me I would dare to say that I love it!!! With "Heroes" we have one of the highlights out of "Midnight Empire"! In the vain of the band's debut, this song is pure candy in my ears with its breathtaking melody.

The AOR-tastic "Rio" is very good while with "Battlefield Of Love" One Desire wrote, probably, one of its best songs to-date! Anthemic, heavy and with these tasteful melodic lines enough to send you to heaven. "Killer Queen" is simple killer melodic hard rock at its best and with the ballad of "Only When I Breath" the album closes with a such a beautiful way.

To be honest, I didn't expect anyhing less from One Desire. Quality, passionate, soulful and high class melodic hard rock/AOR stuff at its best. I can't say if this new opus is better than the golden debut, the only thing that I have to add here is that One Desire with "Midnight Empire" put theirselves among the elite of their genre.