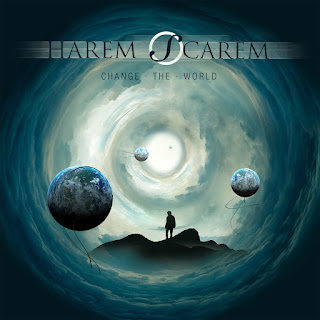 One of my all time favorite bands, Harem Scarem, strikes back with a brand new record that's going to be released on March through Frontiers Music. The new opus is entitled "Change The World" and is yet another highlight that stands equally besides the band's classic discography.

"We really only have one goal when we start working on a record and that is to try and write the best songs we can,” tells Lesperance, "In the beginning, Harry and I work individually on parts and than bring them together to see if we have a good starting point for some songs. I think we've finally found our stride (I should hope so after 30 years of being a band) and we just try to keep ourselves happy musically, but deliver something that we feel the fans will like!"

The opening tune of "Change The World" is 100% Harem Scarem at its best. Melodic as it gets with Hess's amazing vocal lines, Lesperance's crunchy guitars and with a chorus line to die for. Amazing track! "Afterschock" is edgier, heavier and sounds like it jumped out from the band's superb "Weight Of The World" record. More classic HS in "Sreaming For Meaning" while in "The Death Of Me" the band shows off its more modern hard rock side. The sound here is moodier, heavier but is again another killer song out of the new opus.

"Mother Of Invention" is the first slow moment here. I think that when it comes to some big and sentimental power ballads Harem Scarem delivers some excellent and timeless tracks. "In The Unknown" is probably the best tune here; a guitar-driven melodic rock monster, in the vain of First Signal's albums, with a killer chorus line and an inspired melodic line. The fast-paced "Riot In My Head" and the modern rocker of "Fire Gasoline" are both delicious!!

Spread the word; HAREM SCAREM are back with a killer opus all the way! "Change The World" is the Harem Scarem album that their long time fans asked for! Killer melodies, breathtaking performances, catchy as hell hooks and choruses and songs that will be future classics! Highly recommended!