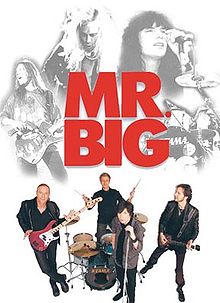 MR. BIG is a hard rock band that was formed in Los Angeles in 1988. The quartet was composed by Eric Martin on lead vocals, Paul Gilbert on guitars, Pat Torpey on drums and Billy Sheehan on bass.

After Billy Sheehan's departure from David Lee Roth's band in 1988, he began piecing together a new band with the help of Mike Varney from Shrapnel Records, a label specialized in the shredding genre. He recruited Eric Martin, of the Eric Martin Band and also solo artist, and soon they added guitarist Paul Gilbert and drummer Pat Torpey. Gilbert was already a well-respected guitarist who had released two albums with his Los Angeles-based heavy metal band Racer X. Torpey came to California from Arizona, and toured with a number of high-profile artists, most notably Robert Plant. 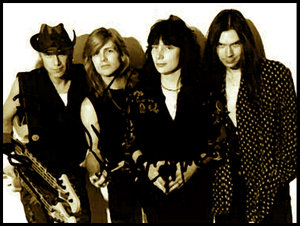 In 1989, they have signed up with Atlantic Records and released their self-titled album the same year. The sound was somewhere between Van Halen and the hard rock bands of that era and combined big harmonies, awesome guitar work and a tight musicianship! In June 1990, the group toured in America opening for RUSH. In August 1990, two songs, "Strike Like Lightning" and "Shadows", performed by Mr. Big were exclusively released on the soundtrack album of the action film Navy Seals.

Mr Big's second album in1991,"Lean Into It" , was a major commercial breakthrough, especially with the success of the two ballads, "To Be with You" (number one song in fifteen countries) and "Just Take My Heart", as well as the song "Green-Tinted Sixties Mind". They toured the UK in April and May 1991 and again in 1992, releasing a live album, "Mr. Big Live" , in 1992. For three nights, they opened for Aerosmith at London's Wembley Arena. 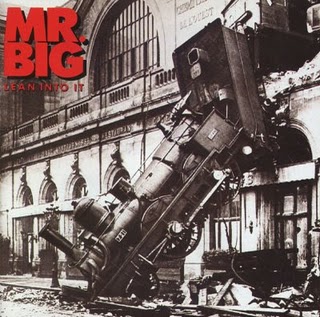 In 1993, it was time for Mr. Big's third album, "Bump Ahead". A more straight forword hard rock album with some really great tracks and a cover track, "Wild World", which peaked #27 on Billboards Top100! They released "Hey Man" in 1996. The song "Take Cover" was included on the soundtrack to the cartoon series Mega Man. Although the band never replicated its earlier success in the US market, their popularity continued to soar in Japan; they also gained a stabler following in newer Southeast Asian markets such as Thailand and South Korea. In Japan and in the rest of Asia, on the other hand, they continued to sell out tours, resulting in a number of live releases for the Japanese market.

"Live At Budokan" was one of those live releases intended for the Japanese market only. By the time the album appeared, the group had been put on ice as the band's members were more interested in other projects; the band temporarily broke up in 1997. 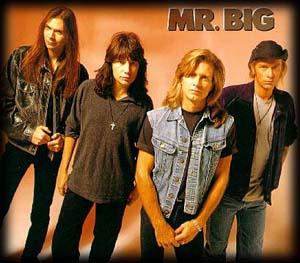 Gilbert has left the band in 1997, and eventually reformed Racer X. Richie Kotzen, another Shrapnel artist and guitarist for glam rockers Poison that time, was brought in as Mr.Big's new guitar player. Two studio albums were released by this lineup: "Get Over It" in 2000, and "Actual Size" in 2001.
"Get Over It" was released on September 1999, in Japan, and yielded "Superfantastic," a multi-platinum number one hit in Japan. Mr Big performed a twenty-date tour of Japan followed by a New Year's Eve 1999 show with Aerosmith at the Tokyo Dome in Tokyo. "Get Over It" was released in the US in March 2000, followed by a short club stint at "Roxy", California.

In 2001, Mr. Big released "Actual Size" in Asia. The CD sat on the charts in the number three spot and "Shine", the first single, was number one. The song was also used as the ending theme for the animation series Hellsing. 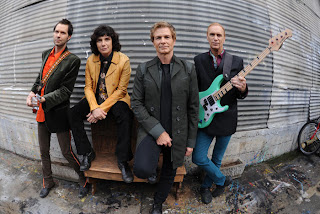 However, tension had developed between Billy Sheehan and the other members when Billy began touring with Steve Vai. Eric Martin, Richie Kotzen, and Pat decided to write songs without Billy, and Billy was only given credit for two songs on "Actual Size". 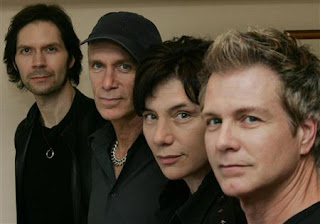 On February 1, 2009, a radio announcement for "Koh Sakai’s Burrn Presents: Heavy Metal Syndicate" contained a short message from Mr. Big, announcing the reunion of the original Mr. Big lineup to celebrate the twentieth anniversary of their debut album. A press conference in Japan in February generated much excitement, and a tour of the country starting in June was announced, with shows in ten locations (including the BUDOKAN).

2011 and all four original MR. BIG members are back with their brand new "What If.." album and they are ready to rock our world for good!