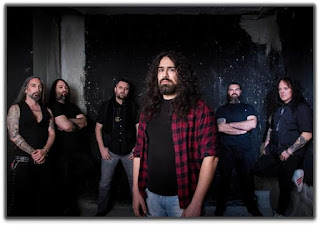 BADD KHARMA is a melodic hard rock band from Athens, Greece, which was formed in 2013 by Nikos Syrakos (vocals, STEAMROLLER ASSAULT), Gregory Giarelis (guitar, solo artist) and George Papazoglou (drums, ex- KING DRAGON). The trio started working on its own songs and after a year of composing and rehearsing, Tasos Ioannides (bass, ex- PHASE REVERSE), Manolis Tsigkos (guitar, INNERWISH) and Dimitris Marinis (keyboards, AIRGED L’AMH) joined in and the lineup was finally completed.

As a six piece, the band started working on new songs and rearranging the older ones. After two years of ups and downs, 13 songs were finally ready and in late 2016, BADD KHARMA entered Orfeas Music Studios and started recording their debut album. The mixing and mastering of BADD KHARMA’s first brainchild were handled by two of the band’s members, Tasos Ioannides (engineering and mixing) and Gregory Giarelis (mastering). The cover artwork, layout design and the band’s logo were made by George Zacharoglou, who has worked in many of INNERWISH albums as well. The name of the band is not just two words that sound nice combined. It reflects their journey, from the day they decided to form the group, up to the day the recordings of their debut album came to an end. What you give is what you take… And no matter where you go, Karma will find you!

We proudly announce today the signing of a new album deal with BADD KHARMA and welcome the band to the ROAR! Rock of Angels roster. More info on the band’s debut album release date and details coming soon!