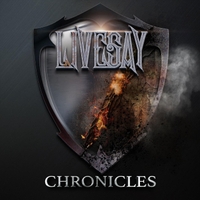 Nowadays, the band is ready to unleash it's brand new opus which is entitled "Chronicles". The new album features thirteen tracks that bring the history of Livesay in full-circle. From the earliest unreleased material from 1992's Demo "Live & Let Rock" to the best of 1996 – 2016 and culminating with the brand new track and single, “International Man" Featuring New Vocalist Mike Gill.

The sound of Livesay can be described as power hard rock with some strong neo-classical 'pinches' and with an overall late 80's vibe as well that can't be missed by any fan of the late 80's genre.

From the opening tune of "Live And Let Rock" you'll understand that this is a very underrated band and is a band that could have been big back then. Next, "Fallen Nights" is a really amazing track. Heavier, moodier but 100% 80's melodic hard rock stuff at its best. Then, we have some excellent and solid songs like "Red Room", the groovier "No Way Out", "Darkest Hour", "You Won't See Me Fall" and "The Burning Times" (that sees Livesay in a more progressive direction) that all show the abilities of Livesay to write and perform solid and powerful melodic heavy rock stuff. The new song, "International Man" is a good one! It kinda of reminds me Lynch Mob's newest works.

All in all this a very good and interesting release from LIVESAY. For those who aren't familiar with LIVESAY's music, this is your chance to discover a great band.