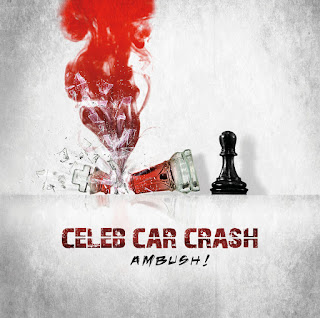 The band consists of Nicola Briganti on lead vocals/guitars, Carlo Alberto Morini on guitars, Michelangelo Naldini on drums and Simone Benati on drums. "Ambush!" includes thirteen tracks, among them a cover song, and their style is modern alternative rock with powerful low tuned guitars, very good vocal performances and a tight musicianship. Add to the above mentioned things the strong production and there you have a very good modern rock album with attitude. There are some excellent tracks here such as the 'heavier' and darker "Dead Poets Society" with its catchy chorus line, the hard rockier "Blinded By The Light", the pop-ish and my personal favorite "Tied Up", "Get More" and "Jerk". The album also includes a cover track to The Beatles well-known tune of "I'm The Walrus" which is very interesting.

Overall this is a good rockin' album all the way. Celeb Car Crash's first step can be described as successful in my humble opinion. They have plenty of talent some very good tracks and it's up to them to do bigger things in the near future.
Heavy Paradise's Rating : 7/10