Raven Lord is the new 'hot' name in the heavy metal world. They have released a great and in an old-fashioned way album that will shake today's metal scene. The band consists of some great names of the metal music business. Csaba Zvekan is the band's lead singer and took the time to answer to Heavy Paradise's questions about Raven Lord's 'who is who', their solid debut album and some other interesting stuff! Enjoy! 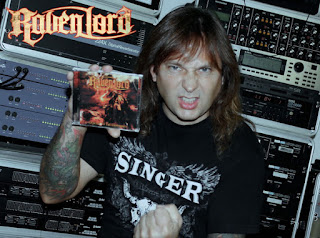 Heavy Paradise: Welcome Csaba in Heavy Paradise for this interview and congratulations for the “Descent To The Underworld” album!

Heavy Paradise: Before starting Csaba, can you tell us some things about Raven Lord? In my ears this band looks like a heavy metal super-group!! How did this band start?

Csaba Zvekan: Thank you for the “super-group” comment. After I left Killing Machine I wasn’t quiet done making music. On the contrary I was hungry for more. Playing shows alongside with AC/DC, ALICE COOPER, EUROPE, SAXON etc. made me crave for even more metal. So my first step was a proper representation with the industry. I found Axel Wiesenauer through FACEBOOK and we started talking. Turned out he had this outfit ROCK’N GROWL started freshly and was looking for bands. Shortly after a management deal was signed and the name RAVEN LORD was born. When looking for players I wanted an international band just like I had with KILLING MACHINE.

The whole thing started out with Tobias and Peter couple of Swedes that introduced me to Stefan Lindholm who played on the record. We quickly added more and more members that me and management hand selected. JAMIE MALLENDER the bass guitarist for ex BLACK SABBATH singer TONY MARTIN was the perfect match.

JAMIE is a multi instrumentalist and a great singer. You see I wanted all front players to be able to sing as I use heavy shouts and big chorus type vocals. After trying and working with several drummers we decided on LARRY PATERSON to be our man on the drums. LARRY is very versatile and experienced drummer. Playing in bands like BAZE BAYLEY and many more. On the keyboards we used Pontus for the recordings but knew that he would not be able to do the tour and had him later replaced with ALESSANDRO DUO for our shows and future recordings.

GEORGE KARAFOTIS joined last year as our youngest member only 19 years of age to be our rhythm guitar player. But after another fallout during the final mix STEFAN LINDHOLM tried to extort more royalties from the band than originally agreed on.
He threatened us not to give his permission should we not budge. This happened after 18 months having his permission for the whole time. We told STEFAN he had to resign from RAVEN LORD and only a few days later I contacted JOE STUMP if he would be interested to play for us. JOE STUMP was all into the RAVEN LORD thing and didn’t hesitate to join up.

RAVEN LORD got signed with MAUSOLEUM RECORDS for a two album deal and will release the second album with the new line up. JOE STUMP is a full member and will be also seen in all our live shows. He will play his versions for the solos.

Heavy Paradise: So far the reviews are solid for your new album! Are you satisfied with the final result of “Descent To The Underworld”?

Csaba Zvekan: Well you know how it is with productions. They are snapshots of the time recorded. I’m a perfectionist and would want to work and fix things forever. Still you have to be strong and say “OK, this is it. As good as it gets. Today. Under these circumstances and budget”.
Or you’re running the risk of an “endless production” that then never comes out.
The praise from the press and cd-reviews are impressive. The interest in RAVEN LORD is very high. Never imagined such an impact and I’m really proud of RAVEN LORD. So, yes I’m satisfied J! 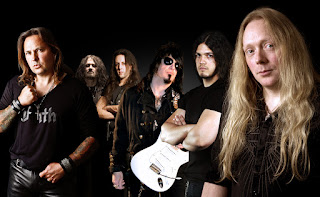 Heavy Paradise: How can you describe Raven Lord’s sound?

Csaba Zvekan: I wanted to take advantage of modern recording techniques. To get modern sounds with all them whistles and bells. However what I didn’t want is to create a new musical genre. Not re-inventing the wheel sort of speak.
I wanted to keep the music traditional. Keep the stuff that we crave and like so much from the music we grew up with. I mean why change something that is obviously good just for the sakes of changing?
RAVEN LORD is mysterious, foreign, dark and sometimes even suspense. The sound is dynamic, fast paced, technical, sometimes aggressive but still fresh and melodic.

Heavy Paradise: Raven Lord is it a band that has a future or is it going to be a one record project?

Csaba Zvekan: Hahahaha I really hope we have a future and make more records. And luckily we have MAUSOLEUM RECORDS and the music industry supporting us on our journey. We are already working on new material for the second album. This would include the “Shredmaster” JOE STUMP with his expertise on the guitars. But you can also expect some input from the rest of our talented RAVEN LORD members. The idea is a steady release every year followed by heavy touring and festivals. 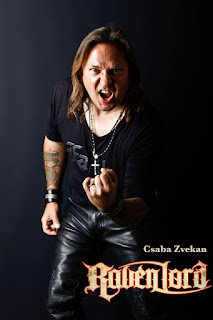 Heavy Paradise: Rock N Growl is responsible for the promotion. I have to admit that Axel is doing an excellent job over the last years. How difficult is for a band nowadays to get a good record deal and a good promoter?

Csaba Zvekan: You see that’s the thing right there. You might be making music for years and nothing really is happening. This is due to the fact of not having proper representation to the labels and industry. The labels and manager are business man. They don’t want to deal with the freaky artist directly.

Or even with the problems they might have. Management is the important link between art and business. Kind of like a buffer in between the two. So that is the key for getting a record deal. ROCK’N GROWL understands the importance for the presence of a band. May it be for the fans or the press. They both are equally important when you promote a band. RAVEN LORD is happy and proud to have AXEL WIESENAUER/ROCK N GROWL as their manager. I personally think of him as another band member of some sort.
Back to your question: It is difficult to find a good promoter as many managers are struggling to make a living with this.

Heavy Paradise: During your career, you have collaborate and sang with many band projects such as Killing Machine, Rough Angel and played (recorded) with members of W.A.S.P., Testament and many others. Which are those moments of your career that you will remember forever and which are the ones that you want to forget?

Csaba Zvekan: I probably forgot the ones that were meant to be forgotten hahahaha. You have to be able to see the positive in the negative. Then suddenly all is well!
Well let’s see of a story I remember. We had this birthday party in North Hollywood that our engineer from Paramount Recording Studios was throwing. He had his garage converted like many of us back in the days to a rehearsal space. By the time I got down to the party it was peaking and I was being asked if I could sing a couple of songs with the musicians that were already there. So I did. We played older Sabbath tunes and a few OZZY songs. When we took a break they informed me who I was playing with.
I had no idea I was jamming with RANDY CASTILLO from OZZY OSBOURNE until they told me so. What a nice guy he was R.I.P.

Heavy Paradise: If you had to pick your favorite track from the new Raven Lord album, which would that be and why?

Csaba Zvekan: That’s hard to say as they all are dear to me. One day I would like to hear “BLACK FRIAR” as it is so mysterious and magical. Then when a comet suddenly hits the earth I like listening to “… Hellstar is coming crushing this earth ..” I mean the song “REVELATION”. In a live situation I really like to sing “METAL KNIGHTS” and “WORLD OUT OF STEEL” as then I can include the masses in the process. I love “SEAL OF THE CROSS” for breakfast and “SUN GOD” to relax at night hahaha. No, seriously I love all them songs or I probably would have not put them on the record. 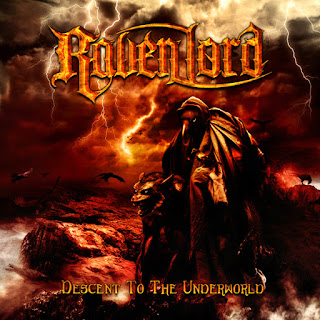 Heavy Paradise: Which are your main influences, Csaba?

Csaba Zvekan: Oh there are so many. I like to sing in the lower power register I call it. The timbre or register I’m using is mainly influenced by singers like RONNIE JAMES DIO and CHRIS THOMPSON. I’m hardly using falsetto upper voice any more as it has no power and grit. Occasionally I do on ballads. But what I really would do instead is jump straight into the high register. Also screaming, high pitch and whistle voice you name it. That has more power, grit and overall attitude. This style has been used by GLEN HUGHES, ROB HALFORD, IAN GILLAN and also by TONY HARNELL. Those are the singers I’m influenced by for the high register vocals.

Heavy Paradise: Are there going to be live performances to promote the album?

Csaba Zvekan: Yes, we want to play as many live shows and festivals as possible. I understand the record just came out. Still the interest from fans and press is high to see RAVEN LORD live. We encourage promoters and especially metal festivals to invite us to their event. In this matter I would like to hand out our booking email address so you can get in touch with our agent. Send an email to booking@rockngrowl.com.
We are confirmed to play Saturday 22nd. June 2013 to play the main stage at the R-MINE PRODUCTION METALFEST 2013. Then we’ll continue to play some shows in the Netherlands. The P3 in Purmerend on the 28th. June 2013 and the Mix in Uithoorn on the 29th June 2013. Followed with some shows and festivals in Continental Europe. To be announced soon.

Heavy Paradise: Closing, which are the Raven Lord’s future plans?

Csaba Zvekan: Future RAVEN LORD plans are playing shows everywhere they show interest. May it be a big or smaller venue we don’t care. As long as we can play there, we will for sure be there ! Then later this year we’ll finish the second album with a release towards early 2014.

Heavy Paradise: At this point, I have to thank you for this interview and wish you all the best for your future plans!!

Csaba Zvekan: Again, In the name of RAVEN LORD I would thank for this great interview and your questions you’ve given. Thanks for the “HEAVY PARADISE” readers out there, our friends, fans and all supporters. See and meet you soon on a event near you !