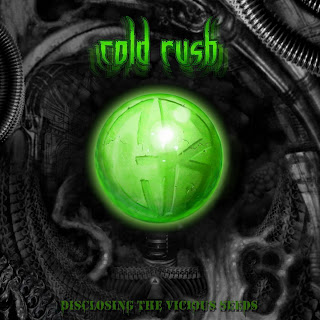 Cold Rush is a German metal band that released its debut album in 2009. The band, also, played throughout Germany with MEGADETH, LAST INSTANCE, MONO INC., DEBAUCHERY, EQULIBRIUM, SUIDAKRA etc.  Since early 2011 Cold Rush is again in the studio and recording their new studio album. With a new singer on board, “Matthias Kupka“ who is well-known from his works with bands such as SUIDAKRA and EMERGENCY GATE, COLD RUSH presents its new sound which is harder, more melodic and more powerful than ever!!


What we have here is the band's new maxi cd called "Disclosing The Vicious Seeds". The first track is titled "Daily Crime". I have to admit that the music here is awesome! It's atmospheric, 'punchy', dark and melodic while the guitar work reminds me a bit of Ramstein's stuff! My only arguement is about the vocal performances! This kinda of brutal-aggressive thing is not my cup of tee! The second track, "White Z", is a great sample of electro-metal stuff!!! The music is again extremely catchy and the vocals are more 'down to earth' than in the previous tune. It, also, features a cool guitar work!

All in all, this is an interesting two-track release. Not the style that I like the most but, for sure, made me curious to listen the band's full-length up-coming release. The thing that impressed me the most here is the music!!!
Heavy Paradise's Rating :7/10