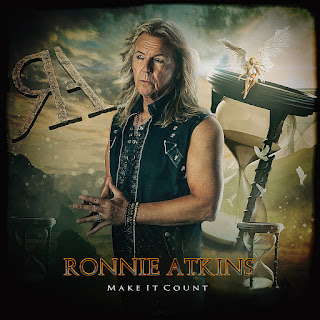 One of the most charismatic voices of the hard 'n' heavy music is without any doubt Ronnie Atkins. The voice of the legendary band of Pretty Maids is now releasing his second solo effort entitled "Make It Count" through Frontiers Music.
After the amazing debut solo "One Shot", this unique vocalist returns with yet another high quality melodic rock/hard rock opus and the sure thing is that it will make the fans of Pretty Maids and those of the melodic rock sound very very happy!!
"Me and my great team of musicians followed exactly the same procedure as we did with "One Shot," since I still feel a bit like I am racing against time because of my diagnosis. So, I basically sent my songs to Chris [Laney, producer], who would then work on a demo. When we were satisfied with the arrangements, I would then record the vocals and then the individual musicians laid down their tracks. I already had quite a few ideas from when "One Shot" was released back in March 2021 and continued writing on and off through the spring and summer of 2021. The album was then recorded between April and October 2021," explains Atkins. As for the music, Ronnie says, "Once again it was quite an easy going proces!! Some of the songs were written on piano and some of them on guitar. I write the way I write, which means that the melodies and toplines are the first priority. If I feel I got a good song with the right chord structure and a strong melody that sticks in my head, then I know I’m on to something good and from there it can only get better."
The new opus kicks-off with the fantastic and ultra commercial tune of "I've Hurt Myself (By Hurting You)". This is exactly what I wanted to hear as a starter by one of my all time favourite singers; super melodic, catchy as hell and in-your-face edgy melodic rock stuff at its best!! In "Unsung Heroes" we are dealing with one of the most inspiring tunes of the new record! The lyrics of "You inspire by your story And you got no claim for glory and You risk your life to save mine" says it all!!!
The Pretty Maids-esque "Rising Tide" is heavier and more up-beat while in "The Tracks We Leave Behind" we have another superb slice of melodic edgy AOR with a huge chorus line!! The melodious and 'darker' "Grace" is just killer and is one of my personal favourites out of "Make It Count". The beautiful ballad "Let Love Lead The Way", the straight forward "Easier To Leave" and "Fallen" are all three great samples of a great singer. The new record closes with a breathtaking song; a song that speaks right through your heart with both its lyrics and music! The amazing "Make It Count"!!!
I'm really impressed, again, by this amazing singer! Ronnie Atkins is here to deliver once again quality and melodic music in such a unique way! "Make It Count" is a true highlight that includes amazing songs, emotional performances and a fantastic musicianship! I will close my review with some lyrics out of the song "Make It Count". "Every little moment make it count, Every precious smile you see around, Every wishful dream that may come true, Every traveled mile just make it count, Every day in life that your allowed, Every ray of light that shines on you"
Songwritting : 10
Production : 10
Songs : 10
Musicianship : 10
Overall Rating : 10 / 10
ARTIST CONTACTS:https://www.facebook.com/RonnieAtkinsOfficialhttps://www.instagram.com/ronnie_atkins_official