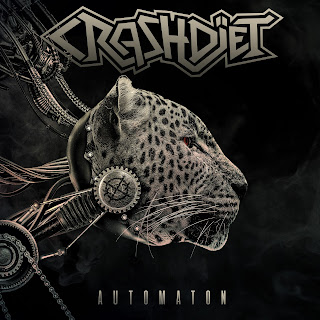 CRASHDIET is back!!! A band that through its 22 years' career and something went through a lot of situations! From the tragic loss of their frontman, Dave Lepard, back in 2006 to the continuing line-up changes, they are still here and they are eleasing new music!!
Nowadays, Crashdiet is back in the game with album number 6!!! The new opus, "Automaton", will be out on April 29th via Crusader/ Golden Robot Records! Just like a gigantic robotic machine with pre-determined instructions, failure was never an option... No matter what obstacles may have come their way in the past, Crashdïet have always marched forward, delivering their own style of Sleaze Metal they have become so well known for.
After the very first spin of the new effort, I have to admit that "Automaton" is, in my humble opinion, one of the best Crashdiet records ever. It's heavy, it's sleazy, it's darker and contains some really solid tracks for your ear pleasure!!
The first huge moment of the new opus comes with "Together Whatever"!!!! A ballsy, ass-kickin' heavy tune with tons of attitude!! Well done!!! The heavier "Shine On" and "No Man's Land" are solid while with "Darker Minds" Crashdiet are delivering a simply breathtaking song!! More in modern-rock direction with a louder than life chorus line and a 'darker' vibe in it!! Awesome!!!  The hair-metal hymn of "Dead Crusade" is yet another highlight out of the new effort! Big groove, ripping guitars, a powerful sound and and a bad-ass attitude! Do you want more?  Check out then "Powerline", which features M. Starr of the 'mighty' Steel Panther, "We Die Hard" and the fast-paced "Unbroken" and you'll discover an overall great record!!!
Closing, I have to say that I enjoyed this new Crashdiet record a lot!! A damn entertaining album that is made with heart, soul, attitude and a strong dose of the late 80's sleaze metal scene. For fans of bands such as Steel Panther, Crazy Lixx, Hardcore Superstar and Reckless Love, this is a mandatory add!!!
Songwritting : 8
Production : 8
Songs : 10
Musicianship : 10
Overall Rating :9 / 10
On-Line:https://www.facebook.com/realcrashdiethttps://www.facebook.com/goldenrobotrecords/