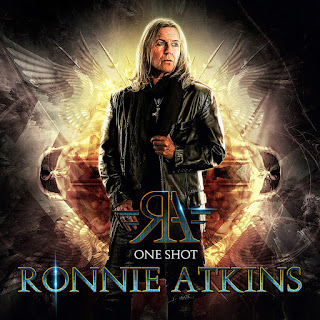 Ronnie Atkins is no other than the voice of the legendary melodic metal/hard rock band of PRETTY MAIDS. With the Maids, Mr. Atkins has released some incredible and classic albums. His voice is without any doubt unique; rough and smooth at the same time Ronnie Atkins can sing just everything with the same passion, period!
The collaboration with ECLIPSE's mastermind Erik Martensson in NORDIC UNION offered us two amazing records that both are already classic in my book. His health issues (he is diagnosed with stage 4 cancer) forced him to set some more goals, pursue his dreams and carry on living instead of feeling pity for himself! The result of all the above mentioned things is Atkins's first ever solo album that is going to be released through Frontiers Music this March.
For those who are waiting a new Pretty Maids sounding opus, let me tell you that "One Shot" is not this kind of a record. "One Shot" is true melodic rock/hard rock album with soulful lyrics, passionate performances, heavenly influenced melodies and harmonic lines to die for and, most of all, with Ronnie Atkins's unique vocals in front row.
For this solo effort, Mr. Atkins collaborated with a special list of guests such as Pontus Norgren, Kee Marcello, Olliver Hartmann, Pontus Egberg, Linnea Vickström Egg, Björn Strid, and at last, but not at least, his Pretty Maids relatives Allan Sørensen and Morten Sandager. Of course "One Shot" wouldn't have happened without the precious help of his friend Chris Laney (Pretty Maids, solo artist).
As I already mentioned above, "One Shot" is an amazing melodic rock/hard rock album full of stunning melodies, beautiful harmonic lines, passioante and soulful performances, clever arrangements and it includes only killer songs. It's really unessecary to review each song seperately 'cause in "One Shot" each and every single track is pure gold and 'cause every song has it's own story to share with you. This effort is one of those that 'speaks' through your heart at once!! Simply breathtaking......
Songwritting : 10
Production : 10
Songs : 10
Musicianship : 10
Overall Rating : 10 / 10

Posted by Heavy Paradise
at Saturday, February 13, 2021
Email ThisBlogThis!Share to TwitterShare to FacebookShare to Pinterest