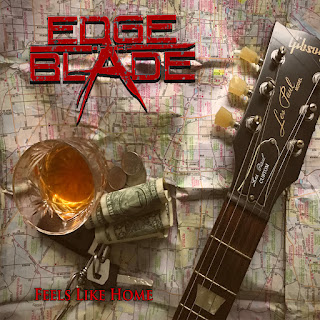 After the solid debut opus, entitled "The Ghosts Of Human", that was released back in 2015, EDGE OF THE BLADE strikes back with a new record with the title "Feels Like Home".
The band consists of Allan Kelly (well-known from his work with SHY) and John Francis (After Hours). The new album is going to be released by the Danish record label of Lions Pride Music this October. The mix and master here is handled by Iraklis Deligiorgis.
After the fantastic and very Def Leppard-ish opener tune of "Santa Clara" comes the edgier and classic song of "State Of Love" (Mark Free). I love this track and I'm damn sure that every die-hard of this genre is in love this one. Edge Of The Blade did a fantstic job here. "Lonely Life" is yet another killer and more hard rock-esque tune while in "Never Be A Next Time" and "The Last Time" (both can be found in Mark Free's classic album) we have two more covers that are both are well-performed in a very respectful way regarding the originals. The commercial "Falling For You" and the bluesier tune of "Never Needed Love" are both solid. The album closes with the up-tempo "End Well" which is among my personal favorites out of "Feels Like Home".
Edge Of The Blade is back in business with a strong release such as "Feels Like Home" is. A well consistent opus that is full of great melodies, killer songs, great arrangements and the spirit of the 80's, early 90's scene in all over the project. Well done!
Songwritting : 8
Production : 8
Musicianship : 10
Songs : 9
Overall Rating : 8,75 / 10