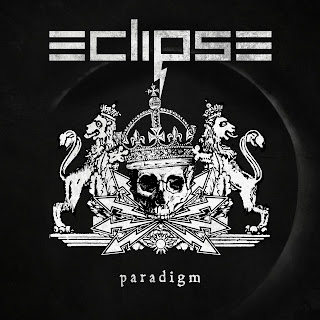 The kings of the new wave of Swedish melodic hard rock/metal scene are back!! Yes, ECLIPSE are now back with their brand new opus entitled "Paradigm" that's gonna be released through Frontiers Music this October. The gang of Erik Martensson (vox, guitars), Magnus Henriksson (guitars), Philip Crusner (drums) and Magnus Ulfstedt (bass) strikes back with yet another great album that the sure thing is it will please each and every single fan of Eclipse and it is, also, a great start for those who aren't familiar with the band's sound.

The new album kicks-off impressively with the powerful and edgier tune, and the first video single, of "Viva La Victoria". A song that reminded me a bit of Erik Martensson's work with Nordic Union. This is a cool track that features an explosive chorus line and the sure thing is that will make you whistle it for days. "Mary Leigh" is a more straight-forward rocker with yet another powerful chorus and it's one of those songs that 'smells' Eclipse from miles away. The hard rocking and moodier "Blood Wants Blood" is one of the new record's highlights. A more down-to-earth rocker that impressed me at once.

In "Shelter Me", the boys are deliver a very melodic and, again, moodier mid-tempo rocker while in "United" we have another 100% Eclipse song. Acoustic guitars, big drums, powerful vocals and epic sound and there you have a killer one!!! With "Delirious" the band offers a 'take no prisoners' melodic heavy rock gem that is among my personal favorites here. Man, this is just great!! The fantastic and heavier "38 or 44", the anthemic "Never Gonna Be Like You" and "The Masquerade" are all winners out of "Paradigm".

I think that words are not enough for a band such as Eclipse is. A very talented band with killer releases so far. The new "Paradigm" stands proudly besides Eclipse's previous records such as "Armageddonize", "Monumentum", "Bleed And Scream" and "Are You Ready To Rock" and it proves in such a great way why this band is considered a leader in this particular scene. A big bravo to Eclipse for yet another killer album!