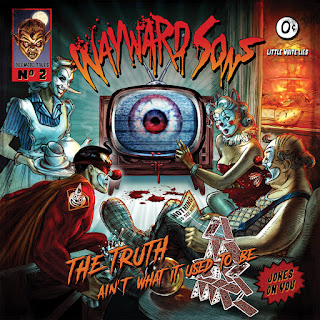 Wayward Sons is a Brit hard rock band that is fronted by Toby Jepson of Little Angels. "The Truth Ain't What It Used To be" is the band's second album and it's going to be released through Frontiers Music this October. Apart from Toby on lead vocals, the band consists of Nic Wastell (bass, Chrome Molly), Phil Martini (drums, Spear Of Destiny, ex -Quireboys, Joe Elliot’s Down and Outz), Sam Wood (guitar, a new gunslinger from Treason Kings) and Dave Kemp (keys, ex-Little Angels touring band and long time sideman to Toby).

After a couple of more heavier and modern rockers, it comes the first highlight of the new album; "Joke's On You" is a really huge rocker that could be described as Little Angels on steroids!!!! Yeap, this is a great and in-your-face modern rock song that includes some late Little Angels magic in it! F$#in' brilliant! Some Queen influences in "Little White Lies" while in "Fade Away" the band delivers yet another solid tune out of this new opus. A kinda of power mid-tempo along with Jepson's passionate vocals that rockets this song to heaven!

It's time for some punchier, up-tempo and more in-your-face music with "Have It Your Own Way", "Long Line Of Pretenders" and "Punchline". All the above three mentioned tracks must be played on a maximum volume and in my humble opinion, they are killers!!! One of my personal tunes here is the moodier "Us Against The World" that includes such an amazing performance by Toby Jepson, great arrangements, killer guitars and it's among the best songs out of "The Truth Ain't What It Used To Be".

Wayward Sons are back with album number two and what a great opus it is! Toby Jepson sings his heart out here and the rest of the band sounds tighter and ready to shake your place down. A really mixed bag of some good ol' Little Angels along with a more updated and powerful sound and there you have another cool release to bang your head! Highly recommended stuff!