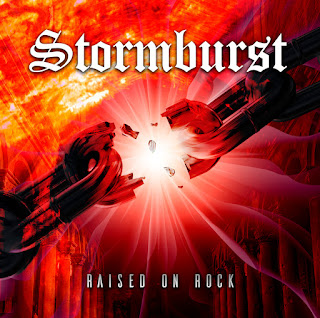 Stormburst was formed back in 2014 and their goal was, and still is, to create solid, fan and straight forward melodic rock/hard rock music. They started as a cover band but the time has come to write and release their own material. The band's mojo is that, even if the wind blows hard in your life, sometimes you gotta, with the help of music, stand up strong against all difficulties.

As I already mentioned above, Stormburst plays melodic rock/hard rock with strong melodies, crunchy guitars, powerful vocals and in general their music is pretty solid and makes "Raised On Rock" a must have for every melodic rock fan out there.

The first couple of songs, "Show Me The Way" and "Say You Will", sounds the perfect sample of Stormburst's music; simple, straight forward and extremely melodic!! With "Under The Gun" and "Show Me A Sign", the band delivers two harder edged songs that show the abilities of the band to write heavier songs without loosing any of their melody. It's time for the first slower moment of the debut. "Touched By Love" is indeed a very good ballad that features a nice melody and passionate vocals.

The self-titled track "Raised On Rock" is excellent! It features a feel-good vibe in it, great harmonies and, of course, a catchy hook and chorus line enough to make you turn the volume on 10!! With "Never Too Late", we have another killer and edgier melodic rock song and "All I Want Is You" is a more commercial melodic rock gem and one of my personal favorites out of this debut.

Solid, up-tempo and edgy melodic rock stuff with plenty of melodies, memorable choruses and passion that comes to prove that this scene is not dead yet. A BIG well done for these rockers that are raised on rock and that reflects in every single moment of this great debut!!!