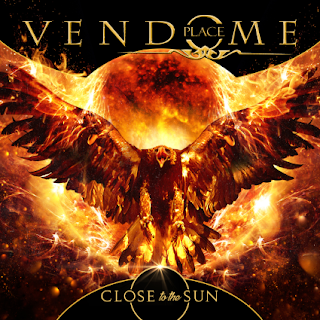 This amazing band started its music journey with the already classic 'Place Vendome' debut in 2005 continue with the also solid album of 'Streets Of Fire' in 2008 and five years later (2013) 'Thunder In The Distance' saw the light of day. As I already said above Place Vendome's debut is a true classic record in my book. Strong arrangements, powerful and at the same time emotional performances, plenty of melodies and killer tunes were the ingredients of that superb album.

Nowadays, Place Vendome is back with a new album which is entitled 'Close To The Sun'. In this new one we find an impressive list of guest (Magnus Karlsson, Gus G, Kai Hansen and Alfred Koffler to name a few) that each one contributes to make 'Close To The Sun' another strong cd in Place Vendome's discography.

The new album starts impressively with the ass-kickin' "Close To The Sun"!! Melodic hard rock with a metallic edge in it that takes no prisoners with! The guitar solo by Uwe Reitenauer is simply breathtaking! "Welcome To The Edge" is yet another highlight; modern with a rhythm section that you feel it in your bones 'Welcome To The Edge' features a killer hook and chorus that sticks in your mind for days. The song 'Strong' is a true surprise here; an orchestral (additional choirs by Alessandro Del Vecchio) tune that includes 'deep' and emotional performances by Kiske, a killer guitar solo and great arrangements marks the turn of Place Vendome into some new music territories!!

"Riding The Ghost" is one of my personal favorites from the new opus. This is the ultimate gem here; fast-tempo, edgy, catchy as hell and melodic as it gets!!! The heavier, more complex but with a chorus line to die for "Light Before The Dark" (feat. Gus G.) steals the show while with "Breathing" Place Vendome offer us another highlight out of their new effort. A moodier, 'darker' but very emotional song with a haunting melody in it and Kiske's amazing and passionate vocal lines!!!

Place Vendome is back with album number four and in my humble opinion it is yet another great one that stands equally besides their previous three records. In "Close To The Sun" Michael Kiske and Dennis Ward pule out some new tricks out of their sleeve and deliver a strong and memorable effort all the way.