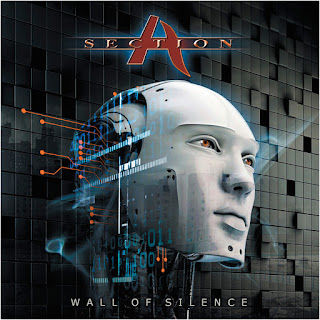 The well-known guitarist Torben Enevoldsen (Acacia Avenue, Fate, Fatal Force) is back again with Section A for a new chapter! For the new album, Torben enters singer Nicklas Sonne (Malrun, Defecto) who is doin' an excellent job regarding the vocal performances.

This is album number four for Section A. The debut “The Seventh Sign” was released in 2003 and featured Andy Engberg (220 Volt, Lion’s Share) on vocals and Andreas Lill (Vanden Plas) on drums. February 2006 saw the release of the follow-up “Parallel Lives,” which was a concept album. The third record, “Sacrifice” was released in 2010.

My first impression of "Wall Of Silence" is that it's about a solid record all the way. It's heavy, it features some excellent and technical guitar parts, superb vocals by Sonne (it reminds me of Mats Leven), plenty of melodies and well-crafted songs. The sound here is perfectly balanced between classic melodic metal and hard rock with some 'careful' progressive pinches and a fresh and updated production that makes the final result extremely interesting.

As appetizer, of what to expect here, we have the opening epic and 'darker' tune of "Wall Of Silence" in which Torben unleashes some impressive guitar licks!!! Next, in "Finding The One" we are dealing with a monstrous melodic metal anthem with a solid rhythm, beautiful harmonies, Sonne's powerful performances and a catchy chorus line!!! "All That Matters" is a complex one; the band mixes perfectly AOR with progressive with some beautiful keyboards and the result is pure magical! "No Tomorrow", "Pray For Freedom" and "Holding On" are all three great samples of Torben Enevoldsen's music talent!

I really liked this album a lot!!! Power and melody in a perfect harmony with some out of this world guitar parts that takes the final result into a higher level! Another strong point of "Wall Of Silence" are the 'deep', powerful and emotional performances by Nicklas Sonne (Malrun, Defecto).